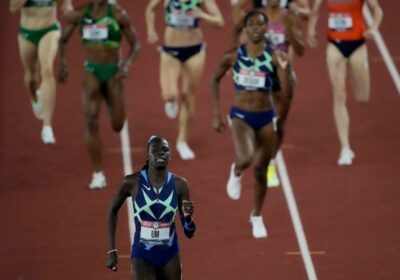 More Tokyo Olympics, more life. The action rolls on Thursday night as we make our way over to the track for the first time since the opening ceremonies when track and field qualifying events begin. Team USA has medal contenders in Rai Benjamin in the men’s 400-meter hurdles, and Athing Mu and Ajee’ Wilson in the women’s 800 meters.

The Americans also resume their regularly scheduled hardware chasing in the pool as two-time gold medalist Lilly King, who won a bronze medal in the women’s 100 meter breaststroke earlier this week, goes for gold alongside Annie Lazor in the women’s 200 meter breaststroke. Three-time gold medalist Ryan Murphy, who won bronze earlier this week in the men’s 100 meter backstroke, will attempt to win a second consecutive gold in the men’s 200 meter backstroke.

Then, for the late-night crowd, we get to watch Diana Taurasi, Sue Bird & Co. continue their quest for perfection as U.S. women’s basketball takes on host country Japan in their second game of tournament play.

If you’re looking for updates on all the Olympic action, you’ve come to the right place.

Defending champion Ryan Murphy picked up a silver in the 200-meter backstroke. Murphy, who also won bronze in the 100-meter backstroke, trailed only Russian Olympic Committee’s Evgent Rylov, who finished at 1:54.27, an Olympic record. It is the first time since 1992 that an American man has not won gold in either backstroke event. — Aishwarya Kumar

After training together every day for the past three months, America’s Lilly King and Annie Lazor finished second and third in the 200-meter breaststroke for silver and bronze respectively. South Africa’s Tatjana Schoenmaker took the gold medal with a world-record time of 2:18:95. — Aishwarya Kumar

After picking up his first individual Olympic gold in the 100-meter freestyle on Wednesday, Caeleb Dressel punched his spot in the finals of the 100-meter butterfly, finishing first in his semifinal heat with an Olympic-record time of 49.71. He’ll race in the final on Friday. — Aishwarya Kumar

Ross and Kleinman roll on

The United States’ women’s beach volleyball duo of April Ross and Alix Kleinman were given a run for their money for a while by the Netherlands duo of Madelein Meppelink and Sanne Keizer, who won a game against Team USA’s No. 1 pairing. But Ross and Kleinman rose to the occasion, rolling 15-5 in Game 3 to end pool play undefeated.

Olympic men’s golf is deep in Day 2 action, and Chile’s Mito Pereira is feeling pretty good. He’s off to a hot start, shooting 3-under through six holes after this nifty chip from the bunker.

Diving isn’t the only thing Great Britain’s Tom Daley does at a world-class level. The gold medalist, who won the men’s 10-meter synchronized diving event alongside teammate Marty Lee, broke out his knitting skills to create the ultimate medal keepsake.

No word on whether these will be available to the general public but let’s be real — you’d buy one.