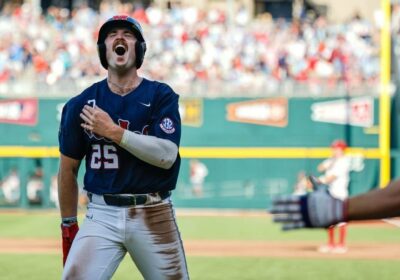 OMAHA, Neb. — Ole Miss, one of the last four teams invited to the NCAA baseball tournament, is now only one win away from being the last team standing.

Mississippi defeated Oklahoma 10-3 in the first contest of the best-of-three Men’s College World Series finals, powered to the victory by an unlikely arm: relief pitcher Jack Dougherty. The sophomore out of Collierville, Tennessee, was forced into service as a starter because the team’s 1-2 aces had been used up in Mississippi’s march to this championship series. The righty responded with his longest outing of the season: five innings of perfect baseball before leaving the mound in the sixth with a 4-1 lead and the bases loaded with no outs. His relief came by way of a freshman right-hander Mason Nichols, who struck out five of the seven batters he faced in two innings of work and surrendered only one run, charged to Dougherty.

A trio Ole Miss pitchers — Dougherty, Nichols and sophomore Josh Mallitz — enjoyed an early-established cushion, as their hitting teammates posted two runs in the top of the first and added one more each in the second and third innings. The last of those came off the bat of fifth-year senior and emerging Oxford, Mississippi, folk hero Tim Elko, who blasted his 24th homer of the season, the highlight of a 4 for 5 night at the plate, which was the first four-hit outing for any MCWS batter since 2009.

When teammates T.J. McCants, Calvin Harris and Justin Bench blasted back-to-back-to-back homers in the top of the eighth, the first team to do that since LSU in 1998, the score was 8-2 and the game was essentially over.

Oklahoma squandered the opportunity of what looked like a huge on-paper mismatch, sending ace Jake Bennett to the mound with a week’s worth of rest, having not pitched since their Series opening game against Texas A&M on June 17. Now Ole Miss will have number two starter Hunter Elliott and his perfect postseason record on the mound Sunday afternoon with a chance to clinch the title on five days rest. Should a Game 3 become necessary on Monday, they could presumably have ace Dylan DeLucia available for at least some work after his gutsy Thursday afternoon complete game shutout that pushed Ole Miss into the final.

The University of Mississippi is one win away from not only its first MCWS title, but the school’s second-ever NCAA-recognized national championship in any team sport. The women’s golf team won the university’s first, only one year ago. The school does claim three national titles in football from 1958-60, but none of those were honored by the Associated Press or Coaches polls.