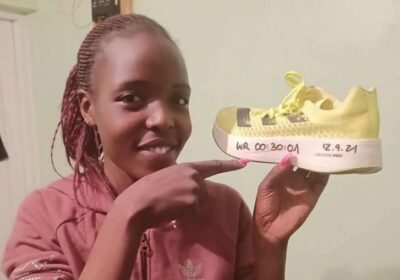 NAIROBI (AFP) – In just a few years, Agnes Tirop established herself as one of the brightest stars in the world of athletics, smashing records and winning medals to become the breadwinner for her vast Kenyan family.

But the distance runner’s life and dreams were cruelly cut short when she was found stabbed to death in the bedroom of her home in Kenya’s world-renowned training hub of Iten on Wednesday (Oct 13), just 10 days shy of her 26th birthday.

Kenya, the country’s athletics body lamented, had lost a “jewel who was one of the fastest rising athletics giants on the international stage”.

“On evidence of what she has achieved in her young career thus far, this is a life cut short, one that will pain us… for quite a long time,” said Athletics Kenya boss Jackson Tuwei.

Born to a peasant farming family in the sleepy town of Kesses in the Rift Valley in October 1995, Tirop started her athletics career less than a decade ago – but swiftly ran up a host of second-place finishes in national and international cross country races.

She went on to become one of Kenya’s rising stars – as the 2015 world cross-country champion, a two-time world medallist over 10,000m, and came fourth over 5,000m at the Tokyo Olympics this year.

She died just a month after one of her greatest achievements: smashing the all-women 10k world record in Germany with a time of 30:01, a whopping 28 seconds under the previous best mark.

Police said her husband Emmanuel Rotich – who was arrested late Thursday in the coastal city of Mombasa – had called Tirop’s parents saying he had done something “wrong”, amid media reports of trouble in their marriage.

While the athlete was making history abroad, her family was relying on the smiling 25-year-old as their breadwinner.

“Agnes was our only hope. We, as athletes in the family, we don’t know what we are going to do,” said her cousin Joash Limo, himself a 5,000m athlete, who called for the government to ensure justice was served.

He spoke as mourners, some of them sobbing, gathered at the family home in a village about two hours’ drive from Iten where relatives proudly showed off Tirop’s medals and trophies.

Tirop’s grief-stricken mother Dinah spoke about her daughter’s generosity to the family – paying for school fees and clothes for children.

“I also depended on her for everything,” she said. “Whenever she visited home, she would shop for me and we would all celebrate being with her.”

In Iten, the high-altitude training centre in the Rift Valley in western Kenya, fellow athletes said they were heartbroken.

“Agnes Tirop has been one of us, we have been training around here in Iten, participating and representing our community, representing our nation in various events in the world. She’s been doing really, really good,” said Isaiah Kosgei, marathon runner and sports physiotherapist.

After her 10k victory in Germany, Tirop posted a picture of herself on Instagram with a beaming smile and her yellow running shoes inscribed with the world-beating time.

She thanked God, her managers, sponsors and her fans, ending with a now deeply poignant declaration: “Tomorrow is promising.”