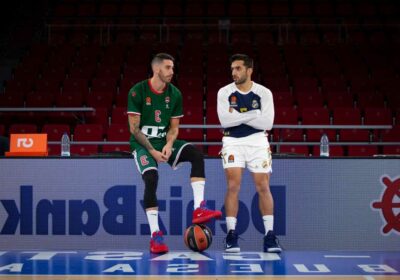 Knicks plan to ‘throw the first punch’ in Suns rematch

Knicks star has shot for something bigger than MVP

PHOENIX — The Knicks officially announced the signing of Argentinian combo guard Luca Vildoza Thursday, and one of his countrymen said he believes they’ve made a smart addition.

Nuggets rookie point guard Facundo Campazzo, who had a big game in Denver’s rout of the Knicks on Wednesday night, told The Post that Vildoza has always been destined for the NBA, even though he went undrafted in 2017.

Vildoza and Campazzo have played together on Argentina’s national team the last four years and competed against each other for three seasons in the Spanish league.

“He’s an NBA player,’’ Campazzo told The Post in a phone interview from Denver. “He has something special in his game. Sooner or later, we knew he was going to play in the NBA. I think he’s going to make an impact here. I believe he can make it and is going to improve a lot in his game here. He can be here many years.’’

The 6-foot-3 Vildoza, who is 25, signed a four-year, $13 million deal, but it’s only partially guaranteed. The Knicks, however, are invested because they have to pay his Spanish league team, Baskonia, $2 million for his buyout.

Campazzo, 30, left the Spanish league this summer and has seen success as a pass-first point guard. Vildoza can even be more versatile.

“He’s a very talented player, very smart too,’’ Campazzo said. “When you see him play his game, I enjoy watching him play every game. You can see in the moment, he’s so talented. He does spectacular plays every game. He makes his teammates much better. That’s very important to him.’’

According to Campazzo, Vildoza still is in Spain, dealing with immigration work issues. He doesn’t know when Vildoza will board a flight to the United States.

“He told me he’s so anxious, so excited,’’ Campazzo, who scored 16 points with four assists, nine rebounds and five steals versus the Knicks, said. “He can’t wait to meet his teammates, see the city, meet the team. He can’t believe the last few days. He can’t wait to go to New York.’’

The two formed the backcourt for Argentina’s 2019 World Cup team that made the finals, also teamed in events such as the Pan American Games and will reunite for the Olympics this summer.

Campazzo said they rotated who played the point.

“He’s [a] very special player,’’ Campazzo said. “He likes to score, likes to pass, plays hard on defense, too.’’

Vildoza, who averaged 10.1 points and 3.4 assists this past season, won the Finals MVP in leading Baskonia to the 2020 Spanish championship. Campazzo won a title with Real Madrid in 2019.

The two Argentinians have spoken a lot more in recent days. Campazzo said one element Vildoza must master is adjusting to the NBA 3-point line. In his three seasons in the Spanish league, Vildoza shot a decent enough 35.9 percent from 3.

“It’s different. You have to practice that 3-point shot,’’ Campazzo said. “It’s really farther (about 1.5 feet around most of the arc, though about the same in the corners) from the rim than Europe.’’

Working the pick-and-roll is Vildoza’s specialty.

“He won’t have problems to score,’’ Campazzo said. “When he plays the pick-and-roll, his shot off the dribble, his [release] is high and it’s a tough shot to block. His middle-range jump shot, he’s very effective. And he’s very good passing it at the same time.’’

Vildoza could join the Knicks in time for the playoffs, but this signing is more about the future. Sources contend a handful of teams would have been interested in Vildoza as an August free agent. The Knicks’ three point guards — Elfrid Payton, Derrick Rose and Frank Ntilikina — all will be free agents after the season.

“He wanted to know how we play here,’’ Campazzo said. “How the NBA plays defense compared to Europe. I tried to advise him but he’s very talented and he knows the players here. The time in Spain is midnight [when the NBA plays on the East Coast], but he knows every player for sure.’’