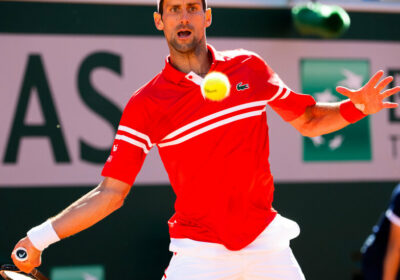 PARIS — Novak Djokovic beat Stefanos Tsitsipas of Greece to win the French Open on Sunday, coming back from two sets down for his second stunning triumph in less than 48 hours.

It was the second Grand Slam triumph of the year for Djokovic, who won the Australian Open in February, and the 19th of his career, just one behind Nadal and Roger Federer, who are tied for the career lead among men with 20.

Djokovic, 34, has said ending his career with more Grand Slam titles than anyone in history is one of the main motivations that keeps him playing tennis.

He is now halfway to a Grand Slam — winning all four major tennis tournaments in a single year — something that no man has accomplished in more than 50 years. He is the defending champion at Wimbledon, which begins in two weeks.

Best not to bet against him.

Djokovic has won Wimbledon five times, and he has won 12 Grand Slam titles on hardcourts, including three at the U.S. Open, which will take place in New York at the end of the summer.

Tsitsipas, 22, is one of the rising stars of pro tennis. He was playing in his first Grand Slam final and was not expected to upset a player who has no equal in his sport at the moment, though he came close.

The match followed the four-set duel that Djokovic played against Nadal two days earlier. Djokovic immediately called that match one of the greatest of his career. It was easily his greatest win in Paris. This one was likely a close second, requiring Djokovic to recover from a violent tumble on the clay in the first set that staggered him badly.

The title was Djokovic’s second at the French Open. He is now the only male player of the modern era to have won every Grand Slam tournament twice.

And yet Sunday’s final was anything but a coronation, even if at first it looked like it would be. Djokovic compared beating Nadal at Roland Garros to climbing Mount Everest. Two days later, it turned out he had to scale K2.

Djokovic appeared to be on cruise control until midway through the first set. The score was tied, 3-3, but Djokovic had yet to lose a point on his serve, and he had already put pressure on Tsitsipas during his service games. Tsitsipas had saved himself with four early aces. The match was tight, but it wasn’t close.

Then Tsitsipas hit a drop shot that landed just a few feet from the net. Djokovic sprinted for it and stretched to get his strings on it, but as the ball hit the clay a second time, Djokovic lost his footing and tumbled to the clay, just missing a collision with the thick wooden post that holds up the net.

He stayed on the clay for several seconds. Tsitsipas and the chair umpire approached to see if he was OK. He said he was, but rose slowly and walked to his chair to dust himself off as the chair umpire picked up his racket.

Djokovic returned to court a minute later, but slowly, and from that moment on he was not moving the way he normally does.

There is this thing that Djokovic seems to do in the biggest moments of nearly every big match. He makes a conscious decision that the time to win has arrived. His first step to the ball gets a few milliseconds faster. His groans as he makes contact get a few decibels louder.

If he needs a little more patience to wait for the right moment to attack he has that, too. His changes of direction become even more crisp. Using his freakish flexibility, he unleashes his forehand like a slingshot, deriving so much power as it unfurls like a Slinky.

After his tumble in the first set, all of that appeared to go away, with the exception of the moans, which seemed to carry a different meaning.

He winced as he twisted on his serves, and could not finish his strokes the way he normally does, whipping his racket up by his ears the way he always does.

He stayed even with Tsitsipas in the first set, and broke him at 5-5 as Tsitsipas made two seemingly crucial errors. But serving for the set at 6-5, Djokovic made four errors of his own.

In the tiebreaker, Tsitsipas spurted to 4-0 lead, only to see Djokovic get to set point at 6-5 as Tsitsipas took his own tumble across the clay and rose with dust all over the back of his shirt. But Tsitsipas blasted a winner to tie it once more, then forced two more errors from Djokovic to take the first set.

Brimming with confidence and a one-set lead, the Roland Garros crowd whipping into a frenzy behind him, Tsitsipas began smacking the ball with abandon, moving a seemingly hobbled Djokovic backward and forward and going to the net to finish off points. He broke Djokovic’s serve in the first game, then, leading, 4-2, laced a forehand down the line and forced Djokovic into yet another error to get his second break of serve.

On the changeover, Djokovic smothered his face with his towel, exhibiting a kind of hopelessness and despondence he rarely does. A game later, Tsitsipas had a two-set lead and the match was his to lose.

It is one thing to win two sets in a Grand Slam match. It is another thing entirely to win the third one against a player who is on the verge of winning as many Grand Slam singles titles as any man who has ever picked up a racket.

Leading, 2-1, in the third set, Djokovic started jumping on Tsitsipas’s serve for the first time in nearly an hour, pushing him back into the court and moving him from side to side. His shots started landing in spots that left Tsitsipas totally out of position once he caught up to them.

It was as though Djokovic had finally figured out that if he didn’t have the strength to swing an ax he could still use a scalpel. His serve often struggled to get to 100 miles an hour. And at the same time, the precision that had been with Tsitsipas for much of the afternoon was gone.

On the fifth break point of the game, Djokovic sent his return deep to Tsitsipas’s backhand, and Tsitsipas sent it back to the middle of the doubles alley. Djokovic had a lifeline, and five games later he had the third set. Tsitsipas called for a trainer.

Djokovic did not stop there.

The fourth set resembled target practice, a series of surgical strikes from Djokovic that resulted in so many blasts long and wide, or easy balls to the middle of the court, from Tsitsipas. A masterly Djokovic backhand drop shot from behind the baseline gave Djokovic a second service break, and a 3-0 lead. Tsitsipas had to battle just to keep the set from being embarrassing.

After two weeks and three-plus hours of tennis, there was one set to play for the championship.

Tsitsipas had been here before. He let a two-set lead slip away in the semifinals Friday against Alexander Zverev of Germany, only to recover to prevail in the fifth set. Against Djokovic, though, he could not summon the same resolve, no matter how much he tried to talk himself through it during the changeovers.

Trouble came early. Facing break point while serving at 2-1, Tsitsipas was slow to move his feet on a shot from Djokovic that nearly caught the baseline. Tsitsipas volleyed a backhand long. Roughly three hours after Djokovic served for the first set, he had a lead once more, and he was not going to give it up.

With a match and a championship within reach, there may be no player who closes as clinically as Djokovic.

Tsitsipas would make one last stand, saving match point with a backhand winner to the corner. But on the final point, Djokovic worked his way to the net and put away the tournament with an overhead to an open court. It took him a bit to summon the energy to raise his hands in celebration.

Halfway to a Grand Slam.