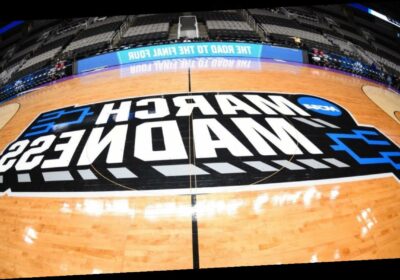 It’s a March Madness like no other, an NCAA tournament held in one state during what everyone hopes is the tail end of a pandemic.

Every game took place in arenas in Indiana, the first state with regulated sports betting to ever host an NCAA tournament. The crowds at the arenas — and at sportsbooks around the nation — were limited and masked, and one opening-round game was canceled due to an outbreak of COVID-19.

But the madness was undeniable. Bracket-busting upsets were everywhere. No. 1 seed Illinois — which at some sportsbooks received more bets to win the tournament than any other team — didn’t make it out of the first weekend. Neither did 2-seeds Ohio State and Iowa, nor 3-seeds Texas and West Virginia. And neither did a lot of the betting public.

Underdogs went an impressive 28-15 against the spread over the first full three days.

“Off the top of my head, the first three days of the tournament have probably been our best ever,” Jeff Stoneback, a veteran Las Vegas bookmaker with BetMGM, said.

By the time favorites went on a run on Monday, going 7-1 against the spread, a lot of bettors had already left Las Vegas or didn’t have any money left to wager.

Not everyone was caught off guard by the rash of early upsets, though. Eli Sawaged, a 29-year-old pharmacy technician in Colorado, saw a few of the bigger ones coming and cashed in on his picks, turning a $10 parlay wager into a $33,000 payday.

The secret to his success? “Pure luck,” he said. “March Madness, I guess.”

Sawaged logged onto DraftKings on Saturday night, about midway through the late tipoff between Abilene Christian and Texas. He recently deposited $50 into his account. It took him five minutes to make his picks, a mix of underdogs and favorites that began with Abilene Christian, a nearly 4-1 live underdog to beat Texas straight-up.

He then turned to Sunday’s games, backing underdogs UCLA, Loyola Chicago, Syracuse, Arkansas, Oral Roberts and Oregon State to each pull off outright upsets. He added a few favorites to “balance it out” — Baylor over Wisconsin, Villanova over North Texas and Houston over Rutgers.

“There wasn’t any super-heavy thought,” he said with a chuckle.

One by one, the games started falling his way. Abilene Christian took down Texas. Loyola Chicago eliminated Illinois. Things got serious after 15-seed Oral Roberts stunned Florida as nearly a 3-1 underdog Sunday night.

“After Oral Roberts hit, that’s when I let my mom know,” Sawaged said.

He watched the games from home until the stress got to him. He headed over to an uncle’s house prior to Oregon State-Oklahoma State, the last leg of his parlay.

DraftKings was offering him different amounts to cash out early. When Rutgers was leading Houston late, the book was offering only $100. The Cougars came back to win, and the offer from DraftKings increased to $23,000.

At his uncle’s house, Sawaged couldn’t eat or drink. He refused to take the cash-out offer and put down his phone to focus on the Oregon State game. He started to question his decision as Oklahoma State rallied in the second half. The Beavers staved off the Cowboys’ comeback, though, and pulled off the upset, sending Sawaged into celebration mode.

“Once the game was over, I just hugged my mom, because it felt good, and dapped everybody up. It was great,” Sawaged said.

The return of Las Vegas

A year ago, as the pandemic took hold in the U.S. and the NCAA tournament was canceled, Las Vegas sportsbooks were dark and quiet. The lights were back on this year, and any questions about whether people would return were answered. With occupancy restricted to 50% as part of coronavirus protocols, the March Madness crowds at Las Vegas sportsbooks weren’t as large as past years, but they were just as passionate and eager to take their shot.

Bettors were lined up early in the morning outside the sportsbook at The Mirage, which opened at 6:30 a.m. Seats at the new three-story sportsbook at downtown resort Circa, as well as at its massive pool amphitheater, Stadium Swim, were sold out.

“We had a gentleman who was in one of the higher-profile booths, and once [UCLA] ended up winning in overtime, he hopped on the table in his retro Russell Westbrook UCLA jersey and was leading the crowd in the UCLA fight song, before security swarmed over and had him get off the table,” Jeffrey Benson, sportsbook operations manager for Circa, said. “It was cool to see, just having that fan atmosphere back and being sold out in the sportsbook. The energy and atmosphere was really electric.”

Stoneback, the BetMGM sportsbook director who works out of the Mirage, said the casino was packed and betting action at the counter was fast and furious. He said the amount bet on the NCAA tournament on Friday was equal to the first day of action on the 2019 tournament and that’s Saturday’s betting handle exceeded the amount bet during the second day of the last tournament.

“The town hadn’t been like this since last March Madness,” Stoneback said. “You wouldn’t even think that it was any different from 2019, except everyone’s got masks on now.”

• While there were many unique elements of this year’s tournament, one thing remained consistent — the bookmakers won early and often.

The biggest win of the opening days for the books came on Loyola-Chicago’s outright upset over Illinois, the first game on Sunday that was singled-out on the schedule.

Sportsbooks PointsBet, BetMGM and William Hill also pointed to Loyola-Chicago as the biggest win for the house of the first two rounds. BetMGM took more than twice as many bets on Illinois as it did on any other team on Sunday.

“We won half as much on that game alone as we did the first two days of the whole tournament,” Stoneback said. “It was big.”

• On Friday, a bettor at the William Hill sportsbook at the Silver Sevens casino in Las Vegas placed a $100,000 bet on Ohio State to win the NCAA tournament at 20-1 odds. Later that afternoon, the Buckeyes lost to Oral Roberts in the first round.

• Sportsbook PointsBet reported that total amount bet on the NCAA tournament through the first three days was three times as much as was bet on Super Bowl LV.

• A bettor with PointsBet hit a $65 five-team money-line parlay that paid $11,026. The bet featured Maryland over UConn, Ohio over Virginia, UCLA over BYU, Oklahoma over Missouri and Abilene Christian over Texas. The odds were 16,963-1

• “The start of the tournament has been about as good as it gets for the sportsbooks across the country, and PointsBet has not been the exception,” Patrick Eichner, communications director for PointsBet told ESPN.

• “Our hold percentage for Friday through Sunday [amount the books won from the amount wagered] was over 11%,” Murray of the SuperBook said. “Monday is going to bring that number down a bit, but that should give you an idea of how well the books are doing.”

• “It’s been an odd year in college basketball,” MGM’s Stoneback said. “We usually struggle the first few months. But this college basketball season was strong all year. I think it was just a tougher season for bettors to handicap. It’s been rough for the bettors, but good for the books obviously.”

• The first-round game between Virginia Commonwealth and Oregon was canceled after multiple positive tests for coronavirus among the VCU program. VCU was around a 600-1 underdog to win the tournament. Futures bets on the Rams were considered action and not refunded at most sportsbooks. Bets on the game were refunded.