Home » Sport » Not registered to vote? What are you waiting for?

Not registered to vote? What are you waiting for? The United States is one of the wealthiest, best educated nations on earth. It invented mass scale democracy. And yet it has one of the worst records on voting.

According to the Pew Research Center, America ranked 26th of 32 developed nations for the percentage of eligible voters who took part in their most recent national election. By Pew’s count, 55.7% of the U.S. voting age population voted in 2016. In the top countries, the participation rate was over 75%.

That is a national embarrassment, and it’s one reason the USA TODAY Network, in partnership with the nonpartisan organization Vote.org, has launched a campaign to encourage 150,000 Americans to register to vote this year.

The “Voting Because” initiative includes interactive tools that allow potential voters to determine whether they are already registered, to register if they are not and to acquire absentee ballots. To encourage informed action and involvement, it also provides explainers on issues ranging from the federal deficit to “Medicare for All” proposals.

The USA’s sorry ranking provides a good indication of why participation is so important. The nations near the top of the list have strong democratic traditions. Those that rank near the United States include Poland, where democratic institutions are under assault. 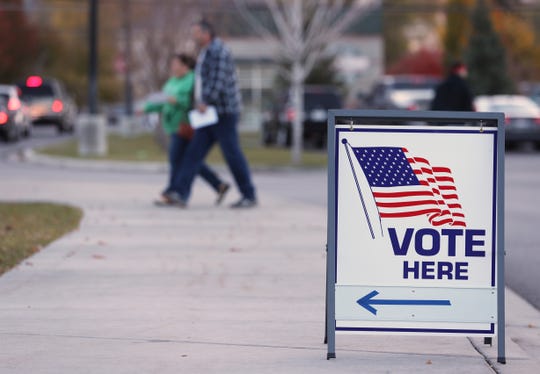 Not long ago, robust voter turnout was universally accepted as a public good. Voting is a right that people have fought and died for. But this century, as politics has gotten coarser, groups that see robust turnout as a problem have grown increasingly vocal. Some even regard vote suppression, a subject we’ll have more to say about as this election year goes on, as a legitimate tactic.

In the 2006 midterm elections, AARP ran ads that repeated the phrase “Don’t Vote” several times before completing the thought with, “Until you know where the candidates stand on the issues.” While the AARP insisted that it was merely trying to get people’s attention, critics saw it as strategy to strengthen the position of seniors by depressing turnout among younger voters.

More recently, a number of academics and political analysts have taken direct aim at the value of voting. One argument made with some frequency is that people needn’t bother to vote because one vote virtually never makes a difference. This argument can spread a sense of powerlessness that causes many to stay home.

How your vote counts

It is also incorrect. After the 2017 Virginia state elections, a legislative seat — and with it control of the House of Delegates — was decided by a drawing of lots because the race ended in a tie. Something similar happened in Mississippi two years earlier.

In 2000, the presidential election was determined by a razor-thin margin in Florida. (Think the outcome didn’t make a difference? In all likelihood, Al Gore would not have cut taxes as much as George W. Bush, nor would he have invaded Iraq.) In 2016, fewer than 80,000 votes in Michigan, Pennsylvania and Wisconsin boosted Donald Trump to victory over Hillary Clinton.

Another argument is that society should not encourage voters to participate because they might not always be well informed. In addition to its elitism, this argument relies on the false assumption that uninvolved voters are less intelligent.

One of the least involved demographic groups is young voters. They also happen to be the best educated. According to the Census Bureau, 39% of people ages 25-34 have a college degree or higher. For those 55 and older, the corresponding number is just 30%.

Voting is a responsibility, a privilege and a sacred trust. It should be encouraged. America should not be content with its low participation rates. And people who don’t bother to vote shouldn’t complain if they aren’t satisfied with the outcome.

USA TODAY’s editorial opinions are decided by its Editorial Board, separate from the news staff. Most editorials are coupled with an opposing view — a unique USA TODAY feature.

To read more editorials, go to the Opinion front page or sign up for the daily Opinion email newsletter. To respond to this editorial, submit a comment to letters@usatoday.com.

If you can’t see this reader poll, please refresh your page.