North of Cooperstown, a Hall of Fame That Fits Canada Just Fine It was induction day, and Jenkins, who was enshrined in 1987, greeted autograph seekers next to his van, the one with “FERGIE31” pounded into the license plates. In between autograph requests, Margaret Higgins, a fan from Ontario, approached with a question.

“Excuse me,” Higgins said, “did you say you’re the only Canadian in Cooperstown so far?”

“Yes, the only one in the American Hall of Fame,” said Jenkins, who was inducted stateside in 1991.

The Canadian hall is accustomed to the comparisons to the hall in Cooperstown, N.Y., by now. Separated by 379 miles, the two museums share only 11 members (non-Canadians are also enshrined in St. Mary’s), but Jenkins is the Canadian hall’s ambassador in an era of expansion. Last year, the quaint museum closed for renovations, adding a 2,500-square-foot wing for archives and artwork next to the stone farmhouse, built in 1868, that was long the hall’s lone structure. Its footprint has doubled.

It is not exclusively Canadian, but 70 percent of the 129 inductees are native born. After reopening in April, the hall welcomed in June its first all-Canadian class since 1998.

The four honorees came from all over the country one day after the Toronto Raptors won the country’s first N.B.A. championship. Pitcher Ryan Dempster, outfielder Jason Bay, the coach Rob Thomson and the executive Gord Ash all walked through the tight hallways to find their plaques. A bagpiper wearing a kilt and two Royal Canadian Mounted Police officers led them to the stage, and the ceremony was held on a baseball diamond in the shadows of a cement factory.

But you won’t find any inferiority complex here.

“If anybody thinks St. Mary’s is out of the way, they should try going to Cooperstown,” said Don McDougall, a past inductee who helped bring the Blue Jays to Toronto. “That’s not exactly in the middle of activity. It’s not like we should be apologetic that we are appropriately sized for the world in which we’re in.”

Baseball in Canada has enjoyed a growing buzz of late. The major league debut of Blue Jays third baseman Vladimir Guerrero Jr., whose father, Vladimir Sr., was inducted into the Canadian hall in 2017, has drawn headlines, as has the Tampa Bay Rays’ exploration of playing games in Montreal. In the hall, the home plate from the Expos’ final game in Montreal in 2004 is kept behind glass.

“Sad event,” Crawford said, “but it’s great that we have it so that we can help preserve the history of the Expos.”

It reopened in 1998 in St. Mary’s, which was selected as the new home for two reasons.

The first was historical: One of the first recorded games of baseball in North America took place in Beachville, Ontario, 28 miles southeast of St. Mary’s, in June 1838.

The other reason was real estate. After the hall’s closing, the St. Mary’s Cement Company donated 32 acres for the hall to use. The hall’s organizers decided to uproot from Toronto and bring the museum’s artifacts to a pastoral setting that now features four baseball fields in addition to the museum building. 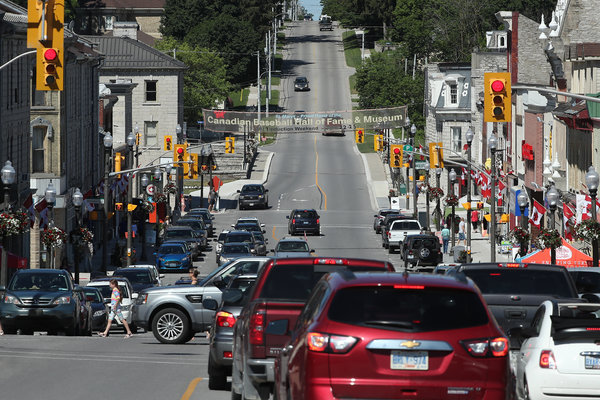 “It always struck me that they were trying to emulate the Cooperstown experience in a small town,” said Ash, an Ontario native who is now the vice president of baseball projects for the Milwaukee Brewers. “Everybody in Canada knows St. Mary’s. Not as large or well-known as Cooperstown, but for us here in Canada it is important.”

Canada’s baseball quirks are on display, as well. Bob Addy is credited on a wall as the first Canadian to play in the major leagues when he took the field for the Rockford Forest Citys on May 6, 1871. While giving a tour recently, Bronte Cronsberry, a museum guide, noted Addy’s attempt at combining sports.

“When he finished playing baseball, he went on to try to make baseball on ice into a thing,” Cronsberry said. “He is like, I am a Canadian, I like hockey, I like baseball and I should be able to do both at the same time. He didn’t succeed, obviously, because that is not a thing we do, but I just really like that he tried.”

The modern inductees have more traditional résumés. While Yankees fans will flock to Cooperstown for closer Mariano Rivera’s induction, it was Thomson, the Phillies bench coach who spent 28 seasons in the Yankees organization, who was honored in St. Mary’s last month.

During his speech, Thomson, who played on the Canadian Olympic team in 1984, recalled his first experience in the major leagues, as a special assignment instructor for the Yankees in 2004. After the memorable Game 7 American League Championship Series loss to the Boston Red Sox at Yankee Stadium that year, Thomson walked into Manager Joe Torre’s office and asked, “Skip, how are you doing?”

Torre looked up over his glasses.

“I’m doing fine,” Torre said, “but I’m a little worried about you.”

“What are you talking about?” Thomson said.

“Because we never did this before until you got here,” Torre said.

Many of the Canadian inductees are aware that their credentials would not get them to Cooperstown, which has welcomed 323 inductees since opening in 1939. The process for induction to the Canadian hall is not far from its American counterpart: Nominees must be retired for three years; either be Canadian or “have done something significant in baseball in Canada,” according to the hall’s website; and must receive 75 percent of a vote by a group of 24 people including members of the news media, past inductees, historians and executives.

One more link between the two halls will be added on Sunday. Roy Halladay, who was inducted into the Canadian hall in 2017, four months before he died when the small plane he was piloting crashed in the Gulf of Mexico, will be enshrined posthumously in Cooperstown. Ash, who drafted Halladay in 1995 when he was the Blue Jays’ general manager, recalled the message that Halladay concluded his speech with in St. Mary’s.

“This has truly been a second home for me and my family,” Halladay said, according to Ash. “I cannot thank you enough from the bottom of my heart for all your support.”

While Canadians showed their appreciation for Halladay with applause that day, Cronsberry said she had noticed a possible change in expectations recently. Right after giving her introductory spiel on the morning of April 27, a fan wondered whether any mementos from Guerrero Jr.’s career had made their way to the hall.