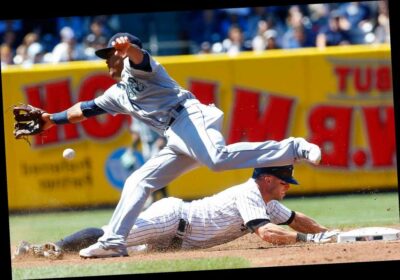 The six Yankees the rest of MLB will be watching closely

The key to Gary Sanchez avoiding another Yankees mess

Jennifer Lopez-Alex Rodriguez breakup drama would have been Mets nightmare

Were you annoyed last week when Major League Baseball introduced a flurry of innovations to its minor leagues?

What if I were to tell you that one of those innovations could decrease one of the most annoying unintended consequences of the game’s leap into widespread instant replay?

You know the play in which a guy steals second base, pops up and separates from the bag for a blink as the middle infielder keeps his glove on him, which replay confirms upon a manager challenge, thereby sending the baserunner back to the dugout? Wouldn’t it be great if that play ceased to exist? While full eradication might prove too ambitious, a bigger base surely would help.

“The current base, if you don’t hit the front of it and stop, you’re going through it,” Chris Marinak, MLB’s chief operations and strategy officer, told The Post on Thursday in a telephone interview. “And this base is a little more forgiving in the sense that, if you hit the front of it, hopefully there’s more catch on the base. You can actually stop on the bag without popping off. Certainly that’s one of the ideas behind it.”

The enlarged bases, going from 15 square inches to 18 and featuring less of a “ramp” than the current bases, will be deployed at the Triple-A level. As Marinak explained, they emanated from observation as well as conversation with players.

“Guys really come into the bag hard,” Marinak said. “They’re trying to steal bases. They’re more athletic than they were certainly 75 years ago, or whenever that (base) was designed.

“We made that change to the neighborhood play (so that) you have to actually hit the bag. (Players said), ‘It would be nice if there were a little more real estate here so I didn’t get killed as I was trying to strike the bag and turn a double play.’ We hear the same thing from the first basemen: ‘Hey, I’ve really got to be careful about where I place my foot so I don’t get my heel stepped on.’ Comments around more guys using molded cleats. The base isn’t really designed to take a high level of force.”

There’s also hope of avoiding the sort of injury that Bryce Harper suffered in 2017, as the bases are more weather-proof.

The “pop-up slide play,” for lack of a better term, occurs roughly 30 to 40 times per season, Marinak said – not that high a number, yet it bats 1.000 for aggravating people when it does occur – and the baseball folks have spent years contemplating a way to solve it. The problem, as Marinak said, is that if you allow some leeway, then where do you draw the line on that leeway? What if such a judgment call impacted a World Series game? It’s better to attack the problem at its core.

The bigger bases also could, in theory, lead to more infield hits and more stolen bases. People like infield hits and stolen bases, action, balls in play and players on the move. So let’s get those big bases up here ASAP. At least if there are unintended consequences (and there surely will be), they’ll be new.

I learned about the impact of the bigger bases thanks to an “Innovation and Fan Engagement Showcase” put on Wednesday by Mariank and other MLB officials. Here’s what else I learned: Fake crowd noise is mandatory for ballparks that will sell tickets for less than 25 percent of their seats. Which means that the two New York teams, both of which will open at 20-percent capacity at their home ballparks, will start the season with fake crowd noise. It’s optional for places where 25 percent or more of the tickets are being sold.

Fake crowd noise is the worst. How much money, I asked Marinak, would it require to change that ruling? I even offered to ask Rupert Murdoch to chip in a few bucks.

“It was not a broadcast demand or request. It’s the clubs that think it’s important because of the competitive dynamics,” Marinak explained. “When you have nobody in the stands and you have no background noise, you can all of a sudden start hearing what they’re yelling out of the dugout. Or if the second baseman is talking to the shortstop where the batter can hear it.”

The more fans in the stands, naturally, the harder it is to hear that stuff. So clubs with relatively empty stadiums didn’t want to be at a disadvantage.

“Hopefully everybody will be over 25 percent soon enough,” Marinak said, and now there’s one more reason to root for that.

This week’s Pop Quiz question came from Gary Mintz of South Huntington: In a 2020 episode of “Curb Your Enthusiasm,” Larry David boasts of his 48-year streak of brushing his teeth and compares himself to a Baseball Hall of Fame player. Name the player.

Out in Tel Aviv, an “expanded and reimagined” ANU – Museum of the Jewish People has opened. Among the artifacts on display there is a game-worn chest protector from catcher-turned-spy Moe Berg.

If you have a tidbit that connects baseball with popular culture, please send it to me at [email protected]