Nets take down Clippers in battle of NBA elites 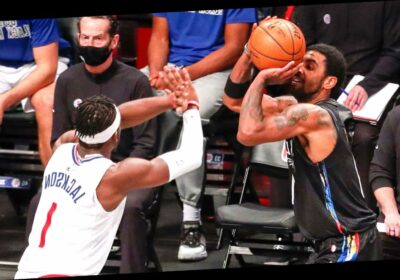 This is what an engaged Nets team can look like. And it’s impressive.

With Brooklyn’s Big Three playing on a big stage Tuesday at Barclays Center, they stormed to a come-from-behind 124-120 statement win against the league-leading Clippers.

After getting served a huge helping of humble pie in Sunday’s collapse at last-place Washington, the Nets bounced back against the best team in the NBA.

“We knew they’re in contention for meeting us down the line, so we wanted to come out and make an impression,” said Kyrie Irving, who had a game-high 39.

Trailing by a dozen early on, and five with under seven minutes to play, the Nets seized the momentum with a 13-0 run. Irving and James Harden (23 points, 14 assists, 11 rebounds) led the way as the Nets (14-9) answered the call against a team many view as a potential foe in their stated goal — the NBA Finals.

After their defense was understandably assailed — ranking 27th in the NBA since trading for Harden — the Nets came through on that end of the court. They had imploded defensively to blow a five-point lead in Washington with under 10 seconds to play, but this time they held on.

Brooklyn led 118-108 on a 3-pointer by Kevin Durant with 1:55 remaining. They saw the Clippers score nine unanswered to draw within one on a 3-pointer by Paul George (26 points), but Durant’s hit two at the foul line with 9.8 seconds to play.

Kawhi Leonard (33 points) hit a pair of free throws, but Harden found Jeff Green for a layup with 5.5 seconds remaining. Green got fouled and had a chance to pad the lead to four, but missed at the stripe. It left the Clippers a chance, but Harden wisely took a foul to prevent a game-tying 3. Nic Batum made just one of two with 2.7 seconds left, and Brooklyn made sure there was no overtime.

“We have to take pride and it has to hurt and we have to really work hard to earn our place. That wasn’t good enough on Sunday, and everyone knows it,” coach Steve Nash said beforehand. “We’ve got to go out there and — win or lose — feel proud of the way we approach the game and the effort we put forward. … Those are the things we have to push to build and that’s our character, who we are. That’s how we respond to a challenge. Whether you execute or don’t is secondary.

“I’m sure our guys will be on guard, they’re playing a fantastic basketball team. The names on the back of the jersey and the front of the jersey, will have them appropriately ready, mentally. But the message is that you can’t turn it off and on like that. And that every game has an opportunity for us to improve.”

The Nets improved to 9-3 against teams .500 or better, the best mark in the NBA. Now if they can sort out their 5-6 record against losing clubs, they’ll be in business.

“Whenever the greats are playing against the greats, you always want to be great,” Clippers coach Ty Lue said before the game. “And they can say it’s just another game, but I know [it’s not].”

Brooklyn fell behind 14-4 to start the game. Leonard’s 8-foot fadeaway left the Nets in a 20-8 hole less than midway through the first quarter. The Clippers had been 15-1 whenever they build a double-digit lead. Now make that 15-2.

Brooklyn stumbled in giving up a 7-0 Clippers run, falling behind 102-97 on George’s three-point play with 6:58 to play. But they responded, led by Irving.

The Nets reeled off 13 unanswered themselves, knotting it on an Irving 3 and then going ahead on his Euro step and acrobatic reverse. His pull-up 3 on the fast break pushed the lead to five, and Harden’s 26-foot step back made it 110-102 with 4:10 left in regulation. The Nets never trailed again in earning a huge win.