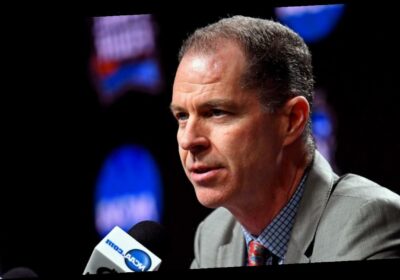 NCAA vice president for basketball Dan Gavitt apologized Friday in a video conference with media, acknowledging the NCAA had fallen short in regard to the large disparity in weight-training facilities in particular at the men’s and women’s NCAA tournaments in Indianapolis and San Antonio. He also said he hoped the ensuing furor, which was publicized on social media, helps the NCAA do a better job with internal communication.

However, coaches such as South Carolina’s Dawn Staley and UConn’s Geno Auriemma, whose teams are both No. 1 seeds, said the situation is reflective of general inequality that women’s programs are accustomed to dealing with.

The NCAA also has faced questions about differences in the so-called “swag bags” given to the men’s and women’s players, the food options available and the type of COVID-19 testing being done for both.

NCAA president Mark Emmert told The Athletic, USA Today and The New York Times in an interview on Friday that the weight-training difference shouldn’t have happened. He said due to COVID-19 challenges, there was less communication and collaboration between the men’s and women’s committees, but added that was no excuse. He said that issues with food deliveries to women’s teams were being remedied, and that the differences in testing were linked to the specific testing providers in Indianapolis and Texas, but that the NCAA had confidence in both. As for the swag bags, Emmert said he thought they were of similar value, although social media photos suggest they weren’t.

Gavitt said it was his role to oversee and coordinate all aspects of the championships.

“We have intentionally organized basketball under one umbrella, with the goal of consistency and collaboration. When we fall short of these expectations, that’s on me,” he said.

NCAA vice president for women’s basketball Lynn Holzman was also on the video call with Gavitt and said she and her staff had a call Thursday night with coaches and administrators for all 64 teams to get feedback on facilities and potential issues for the women’s tournament, which will have first-round games in San Antonio, Austin and San Marcos before going entirely to San Antonio venues for the rest of the event. She said improvements with the weight training equipment would be in place as early as Friday.

Holzman said her background as a women’s basketball player in the 1990s has made her especially committed to try to avoid the kinds of inequities that were just displayed.

“I think there are inherently questions and appropriate challenges relative to equality,” Holzman said. “I have lived in this world. I’ve experienced when you don’t have something that’s the same. This is also why it hits such a nerve with me. It’s our responsibility to give them a great championship experience, and one they can be proud of. It’s disappointing. I don’t even have the words to describe how painful it is personally.”

Staley, speaking on a video call from San Antonio, said she felt Holzman was put in a difficult situation.

“It makes you go back to the very beginning, when the NCAA rolled out that the men were having their tournament in Indianapolis,” Staley said. “And then [the women’s tournament] rolls out a month later. There is a disconnect with that. If you’re going to have a championship for both men’s and women’s, wouldn’t it be best to roll it out at the same time? I don’t know why they didn’t work in concert. You’ve got to ask the powers that be that made the decision to do that. Because it makes you think about every single thing now.”

Auriemma is not in San Antonio, as he is quarantining at home in Connecticut after a positive COVID-19 test Sunday. But he spoke via video call about the big-picture aspects of the difference in treatment, including the fact that the NCAA also runs the men’s NIT tournament but not the WNIT.

“This has been a lifelong issue. This isn’t something new,” Auriemma said. “What’s happening at the NCAA level is a small sample of what occurs every single day on every college campus, pretty much, throughout this country.

“We’re very fortunate at UConn, but it didn’t used to be that way. I spent 20-some years here battling the same things.”

Auriemma said he’s very pleased with how things are at UConn — but he’s also won 11 national championships. He said it’s up to school presidents and athletic directors to make real commitments to more equitable treatment.

“Not just, ‘Let’s give them enough so they stay out of my office and stop complaining,'” Auriemma said. “There are a few other coaches in American who are just like me: fortunate. Some other places they work just as hard, and they probably aren’t [fortunate.]”

UConn associate head coach Chris Dailey, who will fill in as head coach for the Huskies in Auriemma’s absence, was a player in the early 1980s at Rutgers, where she won the last AIAW championship in 1982. The AIWA and NCAA both had national women’s basketball tournaments that year before the NCAA took over for good in 1983. Dailey thinks the NCAA organizers this year never intended to have inequities, but important things were overlooked.

“We’ve come a long way, but we’re still not close to where we need to be,” Dailey said via video call from San Antonio. “One positive thing I would say — Lynn did this last night — they listened to the coaches. And hopefully they’ll make bigger changes before we have to have a social media blast to have everyone be embarrassed and see the difference.

“On the one hand, it’s unfortunate that it happened, but on the other hand, there’s been a response to it. Hopefully it will improve not only for the rest of this tournament, but for the future. It will be looked at differently. There will be more eyes on it.”