NC State stuns No. 1 Arkansas, moves on to CWS 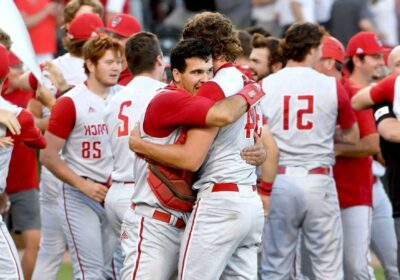 FAYETTEVILLE, Ark. — North Carolina State freshman shortstop Jose Torres hit a shot heard ’round the college baseball world on Sunday, homering off Arkansas’ likely Golden Spikes Award winner Kevin Kopps leading off the top of the ninth inning, as the Wolfpack (34-12) stunned the top-seeded and top-ranked Razorbacks 3-2 to earn a berth in the College World Series.

Torres’ blast came after Arkansas (50-13) knotted the score at 2 in the bottom of the seventh on a two-out solo homer by Cayden Wallace.

Kopps, the front-runner for college baseball’s top award who entered the game with a 0.66 earned-run average and a 12-0 record with 11 saves, was tabbed to make his first start of the season with the Razorbacks on the brink of elimination and after Kopps (12-1) threw the final two innings in a 6-5 loss to NC State on Saturday.

Kopps, who had allowed just six runs in 80 1/3 innings this season, surrendered three runs on seven hits in eight-plus innings, striking out nine.

Freshman Matt Willadsen started for the Wolfpack, allowing only an unearned run on two hits in four innings. Chris Villaman pitched the next three innings, yielding two hits and a run. Evan Justice (5-2) didn’t allow a hit in working the final two innings to pick up the win.

Arkansas took a 1-0 lead with an unearned run in the top of the second. Christian Franklin reached on an error by Wolfpack third baseman Vojtech Mensik and scored on a two-out double by Charlie Welch. NC State came into the game with a team fielding percentage of .983, second best in D-I.

The Wolfpack answered in the top of the third. Austin Murr walked with one out and scored on a two-out two-run home run to left field by Johnny Butler.