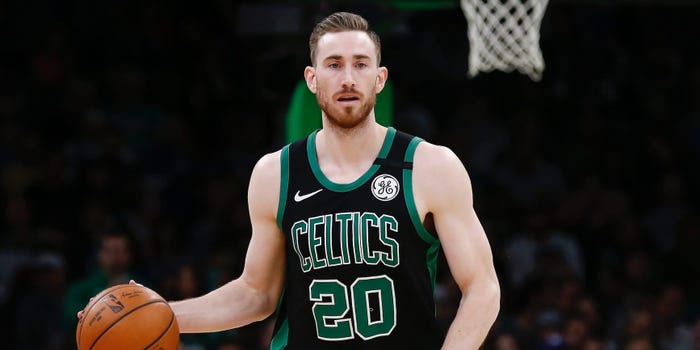 NBA free agency kicked off at 6 p.m. ET on Friday, and over the following two days, many of the top available players agreed to new deals.

While this year's class wasn't as star-studded as 2019, it still contained several solid players who could change a team's fortunes. While some stayed with their teams, others moved to new cities, changing the league's landscape.

A few big-name players remain, such as Anthony Davis and Brandon Ingram, though they are widely expected to remain with their respective teams.

Here are the biggest deals of free agency so far:

One thing to know: VanVleet was the best point guard available in a limited market. He ultimately stays in Toronto, where his shooting, playmaking, and defense is a perfect fit next to Kyle Lowry.

Gordon Hayward signs a massive deal with the Charlotte Hornets

One thing to know: Hayward opted out of a $34 million option for next season, meaning he and his agent believed he could get more money on the open market. After some failed sign-and-trade scenarios with the Pacers, Hayward signed another nine-figure deal, this time with the Hornets.

One thing to know: A solid two-way player and floor-spreader, Gallinari was in high demand. His scoring will ease some of the burdens on Trae Young.

Joe Harris gets paid to stay with the Brooklyn Nets

One thing to know: Harris has developed into one of the best shooters in the NBA. The Nets did not let a crucial player around the Kyrie Irving-Kevin Durant tandem get away.

Bogdan Bogdanovic signs an offer sheet with the Hawks

One thing to know: Bogdanovic signed an offer sheet with the Hawks, and the Sacramento Kings will have to decide whether to match the deal or let Bogdanovic, a skilled shooter and scorer, leave.

One thing to know: Dragic led the Heat in scoring until the Finals. He may be a veteran, but he has plenty still to offer a rising Miami team.

Montrezl Harrell moves across the hall to the Los Angeles Lakers

One thing to know: Harrell had a disappointing playoff performance after winning Sixth Man of the Year. He stays in LA but left the Clippers for the rival Lakers, where he should have a big role, whether as a starter or reserve.

One thing to know: Grant has developed into a solid three-and-D player, and though he was rumored to want to re-sign with the Nuggets, he got a whopping offer to play a bigger role in Detroit.

Davis Bertans cashes in with the Washington Wizards

One thing to know: Bertans was one of the best three-point shooters in the NBA last season. After signing a one-year deal with the Wizards in 2019, they rewarded him big-time.

One thing to know: Morris was dealt to the Clippers midseason last year. He brings defense, toughness, and shooting and helps strengthen the Clippers' wing rotation.

One thing to know: Wood had a breakout season in 2019-20. He gives the Rockets some much-needed size, and his ability to spread the floor would be a good fit with James Harden and Russell Westbrook if they stay in Houston.

One thing to know: The Heat reportedly had an interest in re-signing Crowder, but he ultimately left Miami for Phoenix, where he'll bring toughness, defense, and shooting for a rising Suns team.

Jordan Clarkson cashes in with the Utah Jazz

One thing to know: Clarkson seemed to find a home in Utah as a scorer off the bench who could run the offense in bursts. The Jazz rewarded him for solid play after being dealt from Cleveland to Utah last season.

One thing to know: Ibaka had a strong 2019-20 season. He'll improve the Clippers' front-court rotation with his shooting and rim protection.

One thing to know: Gasol is no longer an All-Star center, but he brings defensive savvy and passing that the Lakers did not have on their roster last year.

One thing to know: Thompson left the Cavs after nine years to beef up the Celtics' front-court. He has plenty still to offer as a rebounder and finisher around the basket.

Rajon Rondo signs with the Hawks

One thing to know: Rondo helped the Lakers win a championship; now he joins a lottery team in Atlanta making an all-out push for the playoffs. He'll be a solid veteran presence next to Trae Young.

Kenatavious Caldwell-Pope stays with the Lakers on a longer deal

One thing to know: Caldwell-Pope was arguably the Lakers' third-best player in the Finals. After playing on one-year deals in LA the last two years, the Lakers gave him a multi-year deal.

Malik Beasley signs a big deal with the Minnesota Timberwolves

One thing to know: Beasley averaged 20 points and 42% three-point shooting after being dealt to the Wolves in February. The multi-year commitment from the Wolves is a bit surprising, as Beasley faces weapons and drug charges from a September arrest.

One thing to know: Millsap reportedly had several suitors but ultimately stayed in Denver, where his shooting, defense, and veteran savvy is important for a young Nuggets team

De'Anthony Melton gets paid by the Memphis Grizzlies

One thing to know: Melton's not a household name, but he's a stingy defender and rebounder whose offense is still coming around at 22 years old.

Dwight Howard moves once again, this time to Philadelphia

One thing to know: Howard had a renaissance season with the Lakers, focusing on defense, rebounding, and finishing around the basket. Now he'll back Joel Embiid in Philly, his fifth team in five years.

One thing to know: Baynes is a sturdy defender and capable of spreading the floor. He'll have big shoes to fill, however, in replacing Serge Ibaka and Marc Gasol.

D.J. Augustin gets paid for backup work in Milwaukee

One thing to know: Augustin has always provided a steady hand and some doses of scoring for teams. He got a surprising deal to play backup point guard in Milwaukee, behind Jrue Holiday.