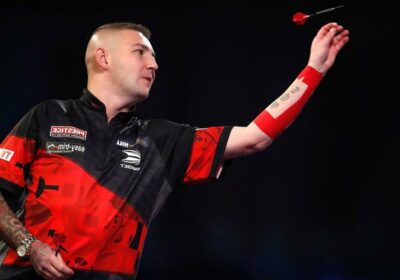 Nathan Aspinall hopes his injury problems are finally behind him after issuing an update from hospital.

The former UK Open champion has been troubled by wrist issues in recent months and it was feared he could be sidelined from the oche for nine months. The Asp played with medical tape on his arm at the world championships and opted to withdraw from the Masters in January. He made his return to competitive action at the International Darts Open, losing 7-3 to Gerwyn Price in the semi-final.

In an interview with Daily Star Sport last month, Aspinall opened up about the severity of the injury, revealing he had torn a tendon and a ligament in the joint, as well as suffering cartilage damage. This week, he paid a visit to the hospital before issuing an update on his Instagram page.

“Last bit of treatment on the wrist. Hopefully the last time I need to come to this bloody hospital [with a fingers cross emoji],” he messaged from behind a mask.

Reflecting on his injury in his interview with the Star back in March, he recalled: "It happened at the beginning of October. That was when it first started – and it gradually got worse. At the world championships, the pain was quite unbearable. I won one match, but that was kind of the final straw. I’d rather not play than embarrass myself or not perform well, so something had to give.

"I had an MRI scan, and that’s when the result came. It was actually a lot worse than I initially thought. Basically, I’ve torn the tendon in my wrist on my throwing arm he told us. I’ve torn my ligament, and I’ve also got a hole in one of my cartilages. And that’s all in the wrist area.

Is Nathan Aspinall a future world champion? Have your say in the comments section.

“We didn’t know how severe it was until I had the MRI scan. The best way to deal with it is to have an operation, but the whole recovery time is about nine months."

A long layoff is he something desperately wanted to avoid. "They're trying to control it as best as they can," he said. "I’m having cortisone injections, anti-inflammatories, doing rehab exercises, and in between playing, I’m also putting my stint back on and trying to give it as much recovery time as possible."