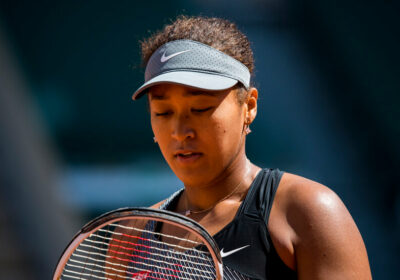 PARIS — A self-described introvert, Naomi Osaka has had to learn to deal with global stardom on the fly.

At times, Osaka, 23, has been thrust into the brightest of spotlights. At times, she has sought that central role. Since emerging as an elite tennis player and a Grand Slam tournament champion in 2018, she has had an uncommonly eventful journey: full of great success on and off the court but also full of dramatic, unexpected developments and no shortage of anguish.

On Monday, Osaka, who is the highest-paid female athlete in the world, walked away from the French Open after her first-round win because of a dispute with tournament organizers over her participation in post-match news conferences. She announced last week that she would not do any press at the French Open, one of the four Grand Slam tournaments, citing concerns for her mental health. On Monday, she elaborated, saying she had “suffered long bouts of depression” since her victory at the United States Open in 2018. “I have had a really hard time coping with that,” she added.

“It’s been just an unbelievable three years for her to have to digest,” said Jim Loehr, a performance psychologist who since the 1980s has worked with athletes, including tennis players like Jim Courier, Monica Seles and Novak Djokovic, but not Osaka. “When you consider the social justice issues and Covid and all the other things that are going on, that’s a lot to put on anyone’s plate so young for sure.”

A look at some of the experiences Osaka has had to navigate:

“This is probably going to be like the worst acceptance speech of all time.” 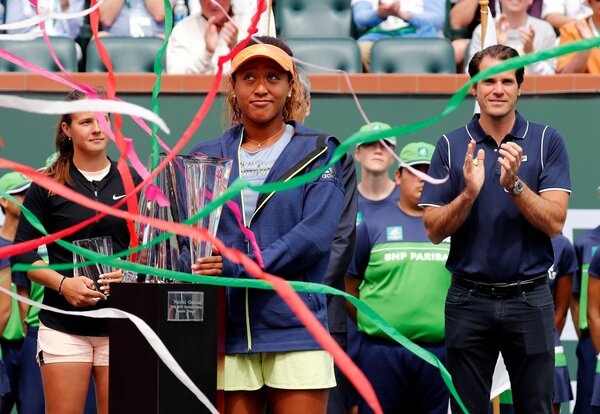 Osaka had been considered a potential breakout star since her late teens. She had easy baseline power and an imposing serve reminiscent of a young Serena Williams. But agents were also convinced that her multicultural background could help her connect to fans internationally. Osaka was primarily raised in the United States, by a mother who is Japanese and a father who is Afro-Haitian.

What she was missing was a breakout result. It came at the BNP Paribas Open in Indian Wells, Calif. Unseeded and ranked 44th, she rolled through the draw in the desert, defeating leading players like Maria Sharapova, Agnieszka Radwanska, Karolina Pliskova and Simona Halep, then ranked No. 1.

Osaka did not come close to dropping a set in her final three matches, making a tough task look easy, but the harder part was to come: the victory ceremony in which her fear of public speaking made it difficult for her to get through the speech.

“The thing is I prepared and everything, and I knew what I was going to say in which order, but then when he called me, I freaked out,” she said later. “And then I just started saying whatever came into my mind first, which is why I think I kept stopping halfway through my sentences, because I just remembered something else I had to say. So, yeah, that was pretty embarrassing.”

“I know that she really wanted to have the 24th Grand Slam, right? Everyone knows this. It’s on the commercials. It’s everywhere.”

But the match turned tumultuous in the second set when Williams had a series of confrontations with the chair umpire, Carlos Ramos, as he cited her for three code-of-conduct violations. The violations resulted in escalating penalties, with Williams being docked a point and then a game.

Many in the crowd were outraged and confused, unfamiliar with the rules on penalties, and the booing continued during the victory ceremony as Osaka pulled her visor down to shield her eyes and cried.

“That is the most traumatic way any champion has ever won their first major,” Pam Shriver, the ESPN analyst and a former leading player, said on Monday.

Again, the tennis, for those sitting courtside, seemed like the easy part for Osaka.

Williams tried to remedy the situation: putting her arm around her much younger, much less experienced opponent during the ceremony and asking the fans not to boo. Osaka has repeatedly made it clear that she harbors no ill will toward Williams.

On Monday, when she announced her withdrawal from this year’s French Open, she said she had “suffered long bouts of depression since the US Open in 2018.”

Whatever psychological challenges Osaka had to navigate after New York did not stop her from winning a second straight major singles title, this one at the 2019 Australian Open. The victory put her at No. 1 in the rankings, but she surprisingly split with her coach, Sascha Bajin, after Australia and was unable to recapture her form in the tournaments that followed.

At Wimbledon, she was upset in the first round by Yulia Putintseva on the grass courts that did not suit Osaka’s big-swinging power game nearly as well as the hardcourts of New York and Melbourne.

At the post-match news conference, Osaka was subdued, answering questions politely but economically. About halfway through her scheduled time, a British reporter asked if it had been difficult for her to adjust to her new level of fame. Osaka turned to the moderator and asked if she could leave because she was beginning to tear up.

“I’m sorry, we have to leave it there,” the moderator told the reporters, as Osaka swiftly exited the room.

“I just thought about what I wanted her to feel leaving the court.”

There were no boos after this Osaka victory in Ashe Stadium, but there were still powerful emotions as she faced Coco Gauff, an American 15-year-old brimming with talent and high hopes for her U.S. Open debut.

The match was a rout as the much steadier Osaka prevailed, 6-3, 6-0. Gauff was crestfallen during and after the handshake, but Osaka, who had practiced at the same Florida academy as Gauff, felt a connection.

She wanted to help and convinced Gauff to share the stage with her for the post-match interview on court so that Gauff could connect with the fans who had cheered her on.

“I wanted her to have her head high, not walk off the court sad,” Osaka explained. “To, like, be aware that she’s accomplished so much, and she’s still so young.”

Seen through the lens of this year’s French Open, it is tempting to take a more nuanced view of that moment. Osaka now has made it clear that she believes athletes should not be obliged to speak to the news media after defeat. But that night in New York was poignant, and Gauff was appreciative.

Now 17, she returned the favor on Tuesday, offering Osaka her support in Paris. “She’s just a really nice person,” Gauff said. “I hope she can push through this. Mental health, it’s a dear subject to me, and I feel for her.”

“Before I am an athlete, I am a black woman. And as a black woman I feel as though there are much more important matters at hand that need immediate attention, rather than watching me play tennis.”

The coronavirus pandemic shut down the tennis tours for five months in 2020, and Osaka spent the time working on her game at home in Los Angeles with her new coach, Wim Fissette. She also became involved in the social-justice and police-reform movements. In May, Osaka flew to Minneapolis with her boyfriend, the rapper Cordae, shortly after the murder of George Floyd to “pay our respects and have our voices heard on the streets,” she wrote in an essay in Esquire.

She returned to the tour in August with a new awareness of the power of her platform. At the Western & Southern Open, she won her quarterfinal match and then announced that she would not play her semifinal against Elise Mertens. Joining athletes and teams in other professional leagues, she was intent on bringing attention to the issue of police violence against Black people.

“If I can get a conversation started in a majority-white sport, I consider that a step in the right direction,” she said in a social media post.

She started more than a conversation. The United States Tennis Association, WTA and ATP jointly announced that they would pause play for the day to support the stand against social injustice and racial inequality. Osaka won her semifinal match the next day, withdrew from the final to manage a hamstring injury, and then went on to win her second United States Open title. Before each of her matches, she walked onto the court wearing a mask bearing the name of a Black victim of racist violence.

Osaka defeated Victoria Azarenka in the final and improved to 3-0 in Grand Slam finals. The young champion who had once struggled to get through a victory speech had found her voice.

“I’m going to take some time away from the court now.”

It was, in part, the memory of her empowered 2020 season that made Osaka’s pretournament announcement in Paris so surprising. In Melbourne earlier in the season, she had been resolute, winning a second Australian Open despite quarantine, bubble life and the two match points she had to save in the fourth round against Garbiñe Muguruza.

But that confidence proved ephemeral. She lost early at the Miami Open and then even earlier on clay in Madrid and Rome.

Before the start of Roland Garros, she announced that she wanted to protect her mental health by not speaking with the news media during the tournament. That caught outsiders and insiders by surprise and created a dispute with tennis officials.

Osaka won her first-round match on Sunday over Patricia Maria Tig but was fined $15,000 for skipping the mandatory news conference and was threatened with a default if she continued to flout the rules. On Monday, she withdrew, and she will take a break from the tour of uncertain duration. Her attempt to seek some refuge in silence instead generated more global chatter and distraction. But this could also turn out to be a watershed in how professional tennis accommodates players with mental-health concerns.

Osaka revealed her challenges with depression and the “huge waves of anxiety” she experienced before speaking to the news media.

“I think there definitely needs to be more open dialogue on what not only her but everyone on the tour goes through,” Sloane Stephens, the American player, said on Tuesday. “I think we don’t talk about it enough. I support her, and I appreciate her speaking out, because maybe that will help other players and other people speak out.”