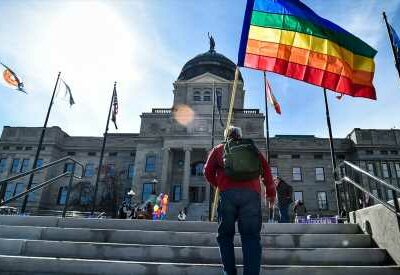 The N.C.A.A. on Monday released a statement in response to the mounting number of bills in state legislatures aimed at barring transgender athletes — mainly women and girls — from competing in sports divisions that match their gender identity, saying that it was “committed to ensuring that N.C.A.A. championships are open for all who earn the right to compete in them.”

But the organization, which has been under pressure from L.G.B.T.Q. rights advocates, major league leaders and its own athletes, stopped short of saying that it would pull championships from states considering such legislation. The N.C.A.A., presided over by Mark Emmert, took that action in 2016 after North Carolina passed a law that restricted restroom access for transgender individuals.

“The Board of Governors continues to monitor the situation and has not made final decisions about the future of championships,” Michelle Hosick, a spokeswoman for the N.C.A.A., wrote in an email to The Times on Monday.

Opponents to those bills are wondering why.

“We are grateful to President Emmert and the N.C.A.A. for past and present leadership to foster diversity, equity and inclusion in sports; their voice in this space has been important in stopping hateful legislation from taking effect and, in some cases, has helped to reverse discriminatory laws on the books,” Alphonso David, president of the Human Rights Campaign, told reporters on Friday. “At this time though, we are asking the N.C.A.A. to do more and to use the power of their visibility to reaffirm and support transgender and non-binary athletes across the nation.”

The Human Rights Campaign is one of several groups that has sent letters to the N.C.A.A. calling for a tougher response to bills that have emerged in at least 30 states this session. One letter was signed by more than 700 collegiate athletes.

“It’s impossible for women athletes to feel safe and supported in an environment where their personal identity and integrity is questioned,” Alana Bojar, one of the athletes who drafted the letter, said on Friday. She is on the track and field team at Washington University in St. Louis.

“The reality is many of these bills cannot possibly be enforced without inviting policing and bullying of all student athletes who do not meet stereotypes of gender,” Bojar said.

Emmert has previously said that the organization should intervene in policy disputes that affect college athletes. Just last year, the N.C.A.A. and the Southeastern Conference pressured Mississippi over its 126-year-old state flag featuring the Confederate battle emblem. The warnings from the college sports industry had outsize influence on a generations-long debate in the Mississippi capital. Elected officials quickly acted to lower and change the flag.

The N.C.A.A. also released a statement on Monday backing voting rights, an apparent dig at Georgia’s new law that led to moves like Major League Baseball relocating this summer’s All-Star Game from the Atlanta area to Denver and statements of protest from other major companies and organizations. Meanwhile, the N.C.A.A. is addressing internal inequities between its men’s and women’s sports programs, highlighted by differences between its college basketball tournaments.

Three states — Mississippi, Arkansas and Tennessee — have signed legislation restricting transgender athletes so far this session, following in the footsteps of Idaho, which became the first state to prevent transgender women and girls from playing in divisions designated for female athletes last summer. Idaho’s law is not being enforced while it faces a legal challenge; barring intervention, other states’ laws are set to take effect this summer.

Gov. Kristi Noem, Republican of South Dakota, signed two similar executive orders after disagreements over collegiate bans prevented her from signing such bills into law; West Virginia’s legislature sent a bill to the governor’s desk for signature on Friday. Gov. Jim Justice has said he will allow it to become law.

This session has seen the highest number of bills aimed at transgender women in sports, according to the A.C.L.U. Republican lawmakers introducing the bills say they are trying to protect female athletes in accordance with Title IX, which forbids discrimination on the basis of sex in educational institutions that receive federal funding and opened up opportunities for women’s sports.

“Children should be able to learn without worrying about whether they will be denied access to the restroom, the locker room or school sports,” read one executive order signed in January.