LAKE BUENA VISTA, Fla. — The Miami Heat, a long-shot title hope at the start of the season, have already exceeded expectations. The Los Angeles Lakers are still trying to meet them.

Nearly a full year after the 2019-20 season began, two teams remain. And the N.B.A. finals, which start Wednesday night inside the league’s bubble at Walt Disney World near Orlando, Fla., promise to feature a blend of styles as the Heat and Lakers grapple for a championship.

The Lakers, after trading for Anthony Davis more than a year ago, entered the playoffs as the top seed in the Western Conference before delivering through three rounds. The Heat, seeded fifth in the East, have surfaced as a surprise to make their first finals appearance since 2014 — back when they employed a player named LeBron James.

On Tuesday, James reflected on the four seasons he spent with the Heat, a team he joined in 2010 when he was 25 and helped lift to two championships.

“I was still a kid and still trying to figure out who I am as a person and as a man,” he said. “I grew, and they allowed me to grow.”

Here are three things to watch in the finals:

Considering the Lakers’ rapid push to the finals — they needed just five games to eliminate each of their first three playoff opponents — it may be easy to overlook the fact that they don’t have their best perimeter defender. Avery Bradley opted out of the restart in July because of family concerns.

“No one says anything about it, and I’m glad they don’t, but what other team could lose their starting shooting guard?” the Lakers’ Jared Dudley asked. “Our best on-the-ball defender? But we’re still here. No one’s made any excuses: ‘Hey, next man up, and let’s go.’” 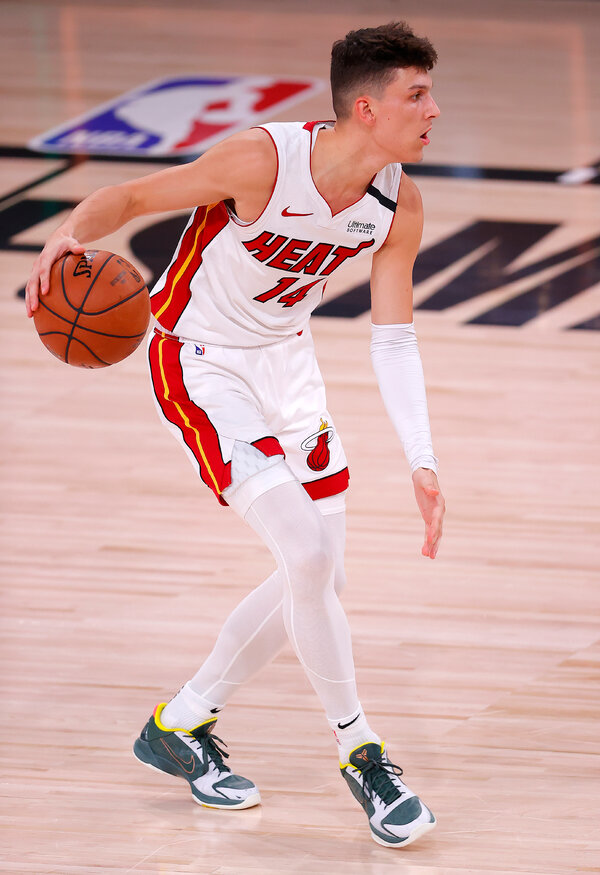 Without Bradley, the Lakers needed a collective effort in the conference finals to defend Jamal Murray, the Denver Nuggets’ dazzling point guard. Over five games, Murray averaged 25 points and 7.4 assists on 51.8 percent shooting. He was such a concern for the Lakers that James asked to defend him down the stretch in Game 5.

Like the Nuggets, the Heat have playmaking wings and guards who can score. Jimmy Butler, in his first season with the Heat, has found a franchise that is a perfect fit for his brand of toughness. Goran Dragic, 34, appears to have access to the same basketball time machine that the 35-year-old James has been using. And Tyler Herro, 20, has been providing crucial minutes for Miami off the bench.

“You never know who it’s going to be on any given night because you can’t key in on one guy,” Butler said. “We have so much trust in each other.”

The Lakers have managed to compensate for Bradley’s absence. The Heat figure to push that experiment to the limit.

2. Experience on both sides.

Speaking of time machines, how about Andre Iguodala? After five straight finals appearances with the Golden State Warriors, Iguodala is back again — this time with the Heat, whom he joined from the Memphis Grizzlies after a midseason trade. Iguodala, 36, found his legs as the Heat eliminated the Celtics in the conference finals, scoring 15 points while shooting 5 of 5 from the field in Game 6. And he will be among a smorgasbord of defenders assigned to James.

James is back in the N.B.A. finals for the ninth time in 10 seasons, and he is determined to win his fourth championship — and his first with the Lakers, who have not won in 10 years. At 35, he has not spent three months in the bubble only to head home empty-handed.

“It’s probably been the most challenging thing I’ve ever done as far as a professional, as far as committing to something and actually making it through,” James said. “But I knew when I was coming what we were coming here for.”

James showed his mettle against the Nuggets, averaging 27 points, 10.4 rebounds and 9 assists over the five-game series.

“He’s still at the top of his game,” Butler said. “He’s still dominating. I mean, you’ve had to go through him at 26, 35, probably at 49. But he’s shown why he is the type of player that he is, why he’s had the career and the legacy that he’s continually building, and it’s not going to be an easy task these next couple of games.”

The Heat have several wings they can throw at James — including Butler and Jae Crowder, a forward who was included in that trade with the Grizzlies. Iguodala, though, is more familiar with James than most, having matched up with him several times as the Warriors’ go-to stopper.

“You want to get guys away from their strengths,” Iguodala said when asked about defending James. “He has a lot of them, so just being strategic.”

There is also a more-than-solid chance that the Heat will play some zone defense against the Lakers, who have been one of the poorest 3-point shooting teams in the playoffs, at 35.5 percent.

Frank Vogel, the coach of the Lakers, has found some frontcourt flexibility with his roster. In the conference semifinals, he went small against the Houston Rockets. Against Denver in the conference finals, he went big by moving Dwight Howard into the starting lineup, and he was effective in his matchup with Nikola Jokic.

Bam Adebayo, Miami’s All-Star center, is another defensive challenge: big, strong, mobile. In the Heat’s closeout win over the Celtics, he had 32 points and 14 rebounds. Vogel has indicated that there could be another opportunity for Howard, an eight-time All-Star who has resuscitated his career as a role player with the Lakers.