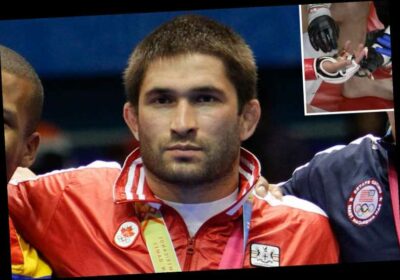 Why UFC underdog can take down champ this time around

UFC middleweight underdog is a good buy at the ‘maul’

UFC headliner ready to slam door on another up-and-comer

In combat sports, gnarly injuries happen. But the one suffered by middleweight Khetag Pliev at a Cage Fury Fighting Championships (CFFC) event on Thursday night in Philadelphia is about as gruesome as it gets.

Pliev’s left ring finger was severed (Graphic image) during his co-main event bout against Devin Goodale, with broadcast cameras picking up what happened between the second and third rounds.

“In the second round, he caught my glove with one hand and held it,” Pliev told ESPN’s Marc Raimondi. “I felt my finger snapped. He kept pulling my glove and my finger snapped. We kept fighting. When the second round was finished, I see my [bone] was out in the open. I wanted to keep fighting, because I felt like I had this guy. But the doctor saw that and stopped the fight. “

Confusion reigned as it was not immediately clear where the disconnected portion of Pliev’s digit had gone or when the injury took place. There was a search to track down the finger and even an announcement asking for help.

CFFC president Rob Haydek later said on the broadcast, available on UFC Fight Pass, that the finger was located inside Pliev’s glove.

Pliev later told ESPN that he was in the hospital emergency room where his finger was successfully reattached.

The bout was halted between rounds because of the injury, with Goodale earning a win via TKO.