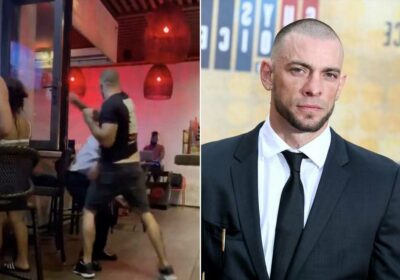 Professional mixed martial arts fighter Joe Schilling has been filmed knocking out a man in a bar.

Bizarrely, Schilling posted footage of the incident to his own social media account, claiming the incident was an act of “self-defense” and he feared for his life.

In the video, Schilling is seen pushing past a man as he attempts walk past him in the busy pub.

He bumps into the man, who appears to take exception to the contact, and the pair exchange words.

Then Schilling suddenly lashes out and punches the man in the head in a one-two combination, knocking him out cold on the floor.

The unsuspecting patron clearly chose the wrong man to pick a fight with. Schilling, who is nicknamed “Stitch ‘Em Up”, was wearing a shirt that read, “Ring, cage parking lot.”

The shocking clip has been widely shared on social media, after Schilling posted it himself.

His Instagram post of the video has since been removed from the platform because it violates its “bullying or harassment” community guidelines.

“7 billion people in this world and you chose me,” Schilling captioned one of several posts about the incident.

“Self defence is apparently not what this country is about anymore,” he wrote.

“Don’t trip I got the video love you guys thanks for the concern and support during my life threatening experience.

“Big shout out to The Yard Muay Thai for preparing me for this life threatening situation #f**kracists.”

The 37-year-old also issued a statement explaining his side of the story. According to Schilling, he acted in self-defence to the man who racially abused a waiter at the bar.

“Little context … this guy’s rapping like an idiot,” he said.

“The busboy, who happens to be black, walks by and this idiot bumps into him and screams out: “Me and broke n*s, we don’t get along.”

“The busboy was seriously offended, but doesn’t want to lose his job. As the night goes on, this clown starts looking at me … I go outside to smoke as I’m walking back, he bumps into me. I put my hand out to catch him, he immediately says sorry.

“You can see me nod my head like cool. The he realises it’s the guy he’s been rapping at all night (and) yells “HEY”.

“I turn around and he flexes on me … bad decisions are made every day.

“The busboy and DJ came up to thank me. As you can see from this video, when he flexed on me I was scared for my life and simply defending myself against the evil in this world.”

Schilling has fought for GLORY and as a kickboxer for Bellator and boasts a record of four wins and six losses across his MMA career.

He hasn’t fought professionally since he lost to Tony Johnson in 2019.