Home » MLS weekend preview: Soccer in the South is back with Atlanta United vs. Nashville SC. Elsewhere, LAFC hosts NYCFC.

MLS weekend preview: Soccer in the South is back with Atlanta United vs. Nashville SC. Elsewhere, LAFC hosts NYCFC. 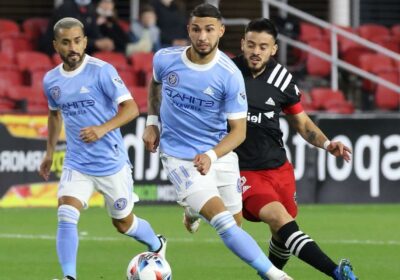 This is the final full weekend of action in Major League Soccer before the league takes a brief break for international play.

In league play, the East-leading New England Revolution (at FC Cincinnati on Saturday, 3 p.m. ET on ESPN+) and West-leading Seattle Sounders (vs. Austin FC on Sunday, 9:30 p.m. ET on FS1) will look to enter the three-week break atop their respective conferences.

Elsewhere, Los Angeles FC – an expected contender that got off to a slow start to the season – hosts NYCFC (5 p.m. ET on UniMas/TUDN) hoping to build off its first win since the season opener.

Here is what you need to know for this weekend in MLS:

MLS game of the week

Atlanta United vs. Nashville SC (Saturday, 3:30 p.m. ET, ESPN+): Soccer in the South is back and so is 2018 MLS MVP Josef Martinez. The Atlanta United center forward suffered an ACL tear in his right knee against Nashville in the 2020 season opener, but has bounced back to begin the season, scoring two goals in six matches. Nashville (2-0-4, 10 points) enters Saturday’s clash as one of three teams still unbeaten and are led by playmaking winger Randall Leal, who has two goals and two assists to his name.

Valentin Castellanos, New York City FC: There isn’t a player of equal skill in New York like Valentin "Taty" Castellanos, the 22-year-old Argentinian forward who has bagged four goals while adding two assists in his first six matches. Stifled by injuries last season, Castellanos is on pace to surpass his 11-goal tally from 2019. He’s recently signed a five-year contract extension to remain in NYCFC’s power blue. He will be a key defensive focus for LAFC in Saturday’s match at Banc of California Stadium (5 p.m. ET).

MLS schedule: What are this weekend's games?

Q2 Stadium in Austin to open at full capacity: When the U.S. women’s national team and Austin FC play their first-ever matches at the brand new Q2 Stadium, they’ll likely do so before capacity crowds. Austin FC and Austin Public Health announced Monday they’ll allow 100% capacity for the 20,500-seat stadium. The 100% capacity decision will apply to both the USWNT match against Nigeria on June 16 to officially christen the stadium, as well as the Austin FC stadium-opener against San Jose Earthquakes on June 19. Q2 Stadium will be the second new MLS venue to open this season after FC Cincinnati raised the curtain on TQL Stadium on May 16 against Inter Miami CF before a 30% capacity crowd.

Seattle, New England pacing respective conferences: Yeah, it’s probably still too early to be thinking about the MLS table relative to the Supporters' Shield, which is awarded annually to the league’s regular-season champion. Still, it’s worth noting that the Seattle Sounders and New England Revolution have shot out of the gates in 2021 and are atop the Western and Eastern conferences, respectively. Seattle’s on 17 points via an undefeated 5-0-2 record, while the Revs are on 14 points with a 4-1-2 record.

Carles Gil signs contract extension: Speaking of the Revolution, they inked designated player and Spanish playmaker Carles Gil to a contract extension, the club announced Monday. Gil’s been earning his money so far in 2021 and now he’ll be rewarded with more of it. So far in the young season, Gil is the joint-leader in MLS with four assists and has more key passes (36) than anyone else in the league by a wide margin. Gil’s been key to New England’s hot start in the East and has one goal to go with his four assists over 630 minutes logged for the Revolution. Gil’s play, metrics and statistics all point to him carving out the early makings of a strong MVP candidacy.

1. Seattle Sounders: Seattle is off to the best start in its history with five wins and two draws through seven matches. That point total should rise higher this weekend after hosting expansion franchise Austin FC, which has lost three straight games. The Sounders are the class of the league through a month and a half.

2. New England Revolution: The Revolution are the best team in the Eastern Conference through six weeks of action. New England, 14 points, is two points clear of second-place Orlando City with hapless FC Cincinnati up next on the schedule. New England defeated the New York Red Bulls, 3-1, the last time out.

3. Orlando City SC: Orlando City’s plus-five goal differential is tied for the best in the Eastern Conference with NYCFC. The key to success in Orlando is defense. The franchise has only conceded one goal in May and two goals for the entire season. Orlando City remains unbeaten through six matches.

5. Los Angeles Galaxy:A 3-0 loss to Portland, thanks in part to a horrific red card by defender Derrick Williams, derailed the momentum built by Galaxy over the previous two weeks. Still, the shutout loss will be chalked up to being down to 10-men unless the team doesn’t rebound at home against San Jose on Saturday.

7. Houston Dynamo: The Dynamo are the surprise of MLS through six matches. Predicted by most to be cellar-dwellers, Houston is in fourth place in the Western Conference with 11 points. The last five matches resulted in two wins, two draws and one loss.

8. Nashville SC: Nashville continues to ride a stingy defense towards points, including the recent 1-0 win over Austin FC. A tight, compact defense is the trademark of the 4-4-2 preferred by head coach Gary Smith. Nashville has kept a clean sheet in four straight matches.

9. New York City FC: NYCFC holds eight points and is in sixth place in the Eastern Conference despite a conference-leading five-goal differential. The 2-1 home loss to Columbus stings. NYCFC hasn’t won a game since May 1.

10. Portland Timbers: Portland is beginning to wake up after a groggy start to the season. Six of its nine points were won over the last two games with a 2-0 win over San Jose and a 3-0 win over Galaxy. The Timbers did lose Andy Polo to a season-ending injury after the horrendous tackle by Williams.