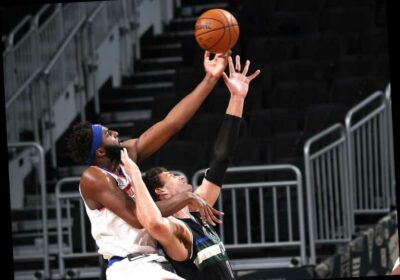 Knicks may now have to rethink Andre Drummond strategy

The Knicks were not the most depleted team on the floor Saturday night in Milwaukee, but the injury news grew worse for them as the night progressed.

Already playing without All-Star forward Julius Randle, the Knicks lost starting center Mitchell Robinson for an extended period for a second time this season. Robinson broke his right foot during the first quarter to put a heavy damper on the Knicks’ 102-96 win over the injury-riddled Bucks, who were missing two-time MVP Giannis Antetokounmpo and three other starters.

Alec Burks scored 21 points with 10 rebounds and Derrick Rose contributed 13 points in 29 minutes in his return to the Knicks’ lineup for the first time since Feb. 28 following a positive COVID-19 result. RJ Barrett also scored 21 points and Immanuel Quickley (13) nailed four 3-pointers as the Knicks moved two games over .500 (24-22) for the first time since they were 5-3 on Jan. 6.

Still, the Knicks’ third straight win proved costly. Robinson was playing only his fourth game since returning to the lineup last Sunday after missing 15 games following surgery for a right-hand fracture. Saturday, Robinson, after landing awkwardly, hobbled off in the first quarter with what the team later announced was a fractured bone in his right foot.

Before the game, The Post had reported that the Knicks no longer were likely to pursue former All-Star center Andre Drummond, who was bought out Friday by Cleveland, because they preferred to stick with the 22-year-old Robinson and save their cap space for the summer.

ESPN reported the Lakers as the front-runners for the Mount Vernon native and former Connecticut star, who also met Friday with the Celtics. But Robinson’s injury could change the Knicks’ thinking, especially since they easily possess the most cap space of those three teams. Another big man on the buyout market is Gorgui Dieng, who played for Tom Thibodeau with the Timberwolves.

The Knicks also have reservations about whether Drummond would be a strong fit alongside Randle.

Randle, one of only two Knicks (with Barrett) to appear in each of the team’s first 45 games, sat out for the first time this season, with a thigh contusion suffered in Thursday’s comeback win over the Wizards at the Garden. Randle adamantly said after Thursday’s victory that he didn’t expect to miss any time due to the injury.

With Randle out, Taj Gibson started alongside Robinson in the frontcourt, and combined with Nerlens Noel for seven blocked shots. Robinson had sprained his left ankle in his first game since Feb. 12 last Sunday against the 76ers, but he remained in the lineup for the next two wins against the Wizards.

The shorthanded Bucks were without five of their top six scorers, most notably Antetokounmpo, who sat with a sprained left knee. Khris Middleton (hip), Jrue Holiday (knee), Donte DiVincenzo (foot), Bobby Portis (health and safety) and P.J. Tucker (calf) also were out.

Antetokounmpo’s brother, Thanasis, a former Knicks draft pick, scored a career-high 23 points and Jordan Nwora had 21 for the Bucks (29-16).

Rose checked into the game midway through the first quarter and scored five quick points as the Knicks grabbed a 32-25 lead. Obi Toppin netted six points in the second quarter, including an alley-oop slam from Burks’ lob for a 57-54 halftime lead.

The Bucks led briefly in the third, but Kevin Knox provided five points off the bench, including a go-ahead 3-pointer as the Knicks carried an 81-77 lead into the final quarter.

The Knicks led by as many as 11 early in the fourth quarter, but Brook Lopez’s dunk with 1:35 remaining capped an 11-2 run for a 96-96 tie. Burks’ 3-pointer 16 seconds later vaulted the Knicks back ahead, giving him at least 20 points for a fifth consecutive game.