Two all-rounders stood tall for Western Australia in the drawn Sheffield Shield match against Victoria at the MCG, but unfortunately for Test vice-captain Mitch Marsh he wasn’t one of them.

In his first match since being dropped for the Test series opener against India, Marsh made a tentative 21 in the first innings and was dismissed for just 11 in the second. 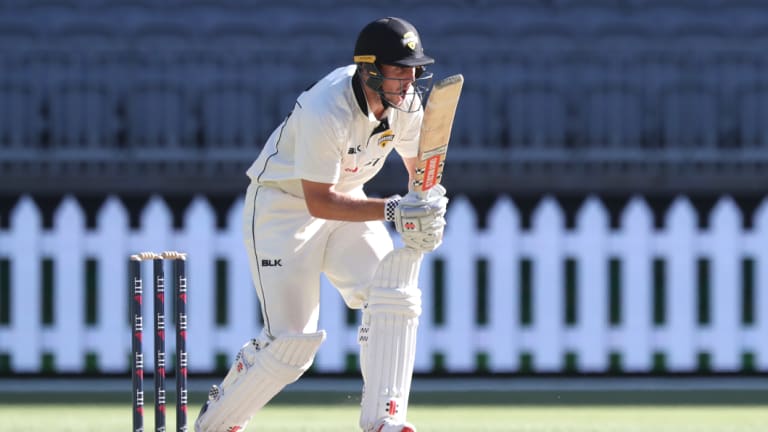 Mitch Marsh did not shine for WA against Victoria.Credit:AAP

Instead it was Marcus Stoinis and Ashton Turner who were the heroes on a final day that ended with their side 6-214. Set a target of 337, WA were in deep trouble at 5-57 but Stoinis (85) and Turner (63 not out) combined for a 119-run partnership that frustrated the Vics.

The final session wasn’t without controversy, with Scott Boland and teammates dismayed when an appeal for caught behind against Turner was turned down, despite replays showing he got a glove to the ball.

Marsh arrived at the crease with his side in trouble at 2-7 before lunch, but he added to the visitors’ woes when he was trapped in front by Jon Holland.

The Vics resumed their second innings at 0-112 and lost wickets regularly in their search for quick runs before they declared at 5-208. Stand-in skipper Travis Dean top-scored in Victoria’s second innings with 68 while young star Will Pucovski made 67. WA seamer Matt Kelly did the damage with the ball with figures of 3-65 from 17 overs.

Top-of-the-table Victoria set up their tilt at a fourth win of the season with a commanding first innings of 9(dec)-424, with Turner top-scoring with 80 as WA were bowled out for 296 in reply.

Nic Maddinson made 162 in his debut for the Vics but he suffered a broken arm when hit by a Jhye Richardson bouncer on Sunday and will be sidelined for up to six weeks.

Cameron White (119) also made it to triple figures, the 35-year-old recording the 22nd century of his first-class career.

At Bellerive Oval, Queensland chased down a ground-record 414 to beat Tasmania late on the final day.
All-rounder Michael Neser (76 not out) and captain Jimmy Peirson (75 not out) guided the Bulls home to cap a remarkable fightback.

The pair shared an unbeaten 143-run stand as the Bulls reached the hefty target with four wickets in hand and 11 overs to spare.

Peirson brought up the win with a single off his hip, as Queensland finished on 6-414. He and Neser rode their luck at times as the Tigers shelled three catches during Monday's final session.

Peirson was dropped shortly after tea by Jordan Silk at slip off Jackson Bird and received a second life when George Bailey grassed a difficult leaping chance at short cover. The previous record fourth-innings chase at Bellerive Oval came in 1997-98, when Tasmania reached 3-401, needing 399 against Victoria.

At the SCG, a stubborn South Australia salvaged a draw with NSW after surviving a dour final day. The Redbacks finished at 6-239 thanks to patient knocks by Jake Lehmann (67 off 157) and Callum Ferguson (36 off 137).

After coming together at 3-100 in the second session, they batted for 44 overs and put on 102 runs to save their side, before Ferguson was dismissed off a sharp catch by Moises Henriques at silly point. Lehmann fell after debutant paceman Greg West found an inside edge.