Vice-captain Mitch Marsh has been dumped from the Australian XI for the first Test with Peter Handscomb getting the nod.

Selectors opted to take in six frontline batsmen, abandoning the practice of including an all-rounder to provide relief for their star quicks. 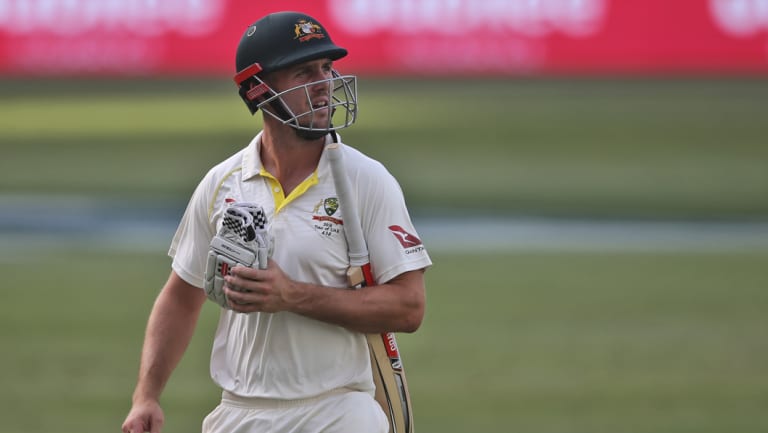 Pack ’em: Mitch Marsh will not face India in the first Test.Credit:AP

Handscomb is slated to bat at number five with Travis Head to come in at six on his home ground.

Marsh paid the price for a terrible run in the UAE and failing to reach 50 in his past four Shield knocks after making 151 three games ago.

Handscomb was dropped 12 months ago after the Adelaide Test, losing his place to Marsh. This time the tables have been turned.

Marsh remains in selectors’ plans for this series and will play in the Shield this week.

“Mitch Marsh probably hadn’t been as consistent as he would like or we would like,” captain Tim Paine said.

“We know the talent Mitch has. Most likely at some stage this series we’ll need him.

“We’re taking the opportunity at the moment to send him back to play a Shield game, get some more cricket under his belt, knowing at some stage we’re probably going to need him.”

Marsh’s axing is a sign of the high confidence selectors have in their star attack to take 20 wickets.

It also places pressure on spinner Nathan Lyon to take the workload off the big three quicks in the expected Adelaide heat.

“The wicket over relays few years here has given enough over the game, we’ve got a lot of confidence in Nathan Lyon bowling a lot of overs if he needs to,” Paine said.

“All our three quicks go in really fresh so we’ve got confidence in them, particularly at the start of the series.

“It’s probably unlikely we’ll use the three quicks as much we will this game through the whole series as it wears on. This being the first Test we think they’ll do the job.”

Marcus Harris will be making his Test debut at the top of the order with Aaron Finch.