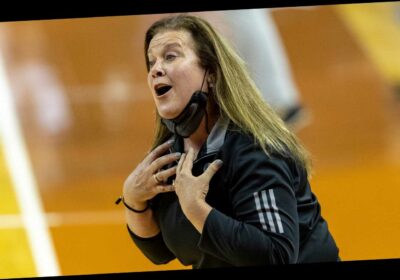 The 15th-seeded Troy Trojans looked like they were going to have a chance to tie the No. 2 Texas A&M Aggies in the final seconds of regulation during a first-round matchup at the women's NCAA tournament on Monday.

Except, possession — and a pivotal call — evaded them when needed most. Instead, the Aggies avoided what a potentially historic 15-2 upset (it would have been the first in women's tournament history) and won 84-80.

With 4.5 seconds remaining and leading by two, Texas A&M inbounded on one side of the court to Destiny Pitts, who appeared to dribble from one side of the halfcourt line to the other, an apparent backcourt violation, before a referee signaled for a foul.

"Was that not an over-and-back?" Renee Montgomery, co-owner of the WNBA's Atlanta Dream who was on the broadcast call for ESPN, asked.

Here’s the uncalled backcourt violation in the Troy-TAMU game that all but ended it for the Trojans. Awful, botched officiating. #ncaawpic.twitter.com/KgRYrec9CL

Indeed, the Trojans bench began looking for the turnover call, but instead Pitts went to the free-throw line.

"It just looked like she touched it and it went backcourt. It just looked very evident that that happened," Troy coach Chanda Rigby said after the game, via ESPN. "We were seeing if we could get the call corrected, but that's just not the way it went. We had all the momentum at that point. If we would have gotten that call, I don't think there's any way we would have lost the game. I don't think the will of my players would have allowed us to lose."

Troy head coach Chanda Rigby calls out to the referees during the second half of a college basketball game against Texas A&M in the first round of the women's NCAA tournament at the Frank Erwin Center in Austin, Texas, Monday, March 22, 2021. (AP Photo/Stephen Spillman) ORG XMIT: TXSS148 (Photo: Stephen Spillman, AP)

Instead of it being Trojans ball — they still would have needed to score to tie or win —Pitts sunk both attempt to provide the final margin of victory. That all came after refs called Troy's Tyasia Moore for an offensive foul on a drive to the basket that could have gone either way.

Properly called, this would have tied the game and potentially given Troy an 81-80 lead with less than a minute to go.

Instead the Trojans lost 84-80. pic.twitter.com/TByBgANP4m

“I knew that if we put them on the free-throw line in the fourth quarter that it was going to be hard to beat them," Rigby said. "It just seemed like we kept getting called foul after foul after foul.”

Troy was whistled for 23 fouls compared to Texas A&M's 12.

NCAA national coordinator of officiating Penny Davis said game officials were in the right place to determine whether Pitts had possession before taking the ball into the backcourt in the final seconds.

“This was an extremely close play. The officials judged that control of the basketball was not gained until the Texas A&M player was in the backcourt. It was as close as they come," Davis said. "No camera or person had a better angle on the play than the official."

Both teams shot 42 percent from the field and Troy outrebounded Texas A&M 48-42. Beyond the officiating in the final moments, the Trojans could also point to faulty outside shooting as a downfall (4-for-23 from three-point range) and turnovers (18).

“Basically we just proved to people all over the world that we’re more than capable,” Troy forward Alexus Dye said. “It doesn’t matter if we’re a mid-major or any kind of major. It’s all about heart.”