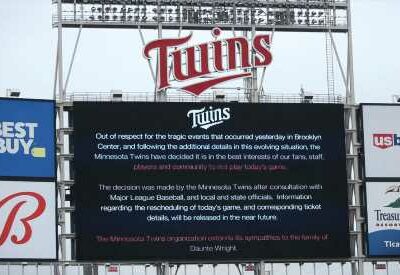 Professional baseball, basketball and hockey games in Minnesota were postponed on Monday in response to tension and unrest after a police officer shot and killed a Black man during a traffic stop north of Minneapolis.

The Minnesota Twins postponed their afternoon game with the Boston Red Sox and were quickly followed by the N.B.A.’s Minnesota Timberwolves calling off a game against the Nets and the N.H.L.’s Minnesota Wild postponing a match against the St. Louis Blues.

With the region on edge as the trial of Derek Chauvin, the police officer facing murder charges in the death of George Floyd, continues in Minneapolis, the Twins said it would not have been appropriate to play. The police in Brooklyn Center, Minn., where the latest shooting took place Sunday, said that the victim, Daunte Wright, 20, was shot accidentally by an officer who had intended to use a Taser.

He added that baseball seemed “a little less important” now, and that the Twins prioritized safety and compassion over holding the game as scheduled.

“Make no mistake, part of the decision here today is out of respect for the Wright family, but there’s a big part of this decision that’s also rooted in safety and consultation with law enforcement about unknowns, about what will, or could transpire within the broader community over the next several hours, based on the news that has come out of Brooklyn Center this morning,” Mr. St. Peter said.

“Once you understand that information, for us the decision becomes a lot easier. The right thing to do is always to err on the side of safety for our players, for our staff, for our fans.”

In a statement, the N.B.A. said the decision to postpone Monday night’s game was made after consultation with the Timberwolves organization as well as local and state officials.

Last spring, after the killing of Mr. Floyd, several N.B.A. and W.N.B.A. players became active participants in the protests that broke out around the country.

Last August, after the N.B.A. had resumed its season on the Walt Disney World campus near Orlando, Fla., some N.B.A. players took their demonstrations further after the shooting of Jacob Blake in Kenosha, Wis. Mr. Blake, then 29, was partially paralyzed after being shot multiple times in the back by police while trying to enter his vehicle. 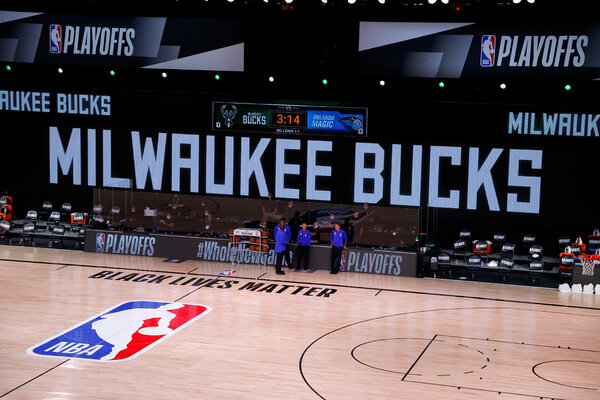 Before a playoff game between the Milwaukee Bucks and Orlando Magic, George Hill, then a guard for the Bucks, persuaded the rest of his teammates to sit out the game. This created a cascade effect: The other games on tap that night were postponed as well, as well as those in other leagues, like women’s basketball, baseball and soccer. Naomi Osaka, a Black tennis star, threatened to leave the Western & Southern Open, which pushed officials to delay the tournament by a day.

Two days later, the N.B.A. and its players union announced an agreement that would convert some team arenas into polling sites and lift the player-inspired work stoppage. Some of the league’s top players, including LeBron James and Chris Paul, consulted with former President Barack Obama on a path forward.

In discussing the Twins’ postponement on Monday, Manager Rocco Baldelli said some players were shaken by the incident in Brooklyn Center.

“We have some guys that I would put in the category of passionate,” Mr. Baldelli said, “and were really damaged and hurt by everything that was going on today.”

The Twins and the Red Sox were scheduled to play four games through Thursday, and this is Boston’s only scheduled trip to Minnesota this season. The teams play a series in Boston in late August, but St. Peter said the Twins have not considered moving the series to Fenway Park.

The N.B.A.’s announcement did not say when the Timberwolves and Nets would make up the lost game. The Wild’s game against the Blues has been rescheduled for May 12.