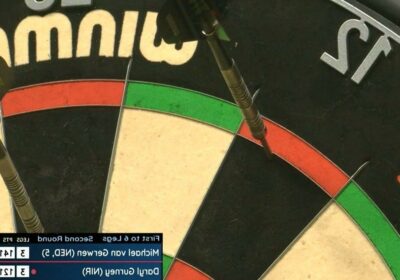 Michael van Gerwen was fractions away from hitting a stunning nine-dart finish as his blistering form on the European Tour continued.

The Green Machine advanced to finals day at the European Open in Leverkusen, Germany with a classy 6-3 win over Daryl Gurney, who gave a good account of himself, only for Van Gerwen to pull clear in the second half of the match. The Dutchman averaged an impressive 113.79 and only just missed double 12 for a nine-darter in the process. Van Gerwen faces another man in form, Premier League leader Jonny Clayton, in the quarter-finals this afternoon.

"Daryl pushed me in the beginning of the game," said Van Gerwen, who has won two of this year's four European Tour events so far. I missed a few darts here and there and that puts you under pressure. I still had a couple of really good legs.

"To be playing back here in Leverkusen is always good. I also want to do well because I think the crowd here deserve it and I need to make sure I keep my focus going. I feel good but tomorrow is another day."

Van Gerwen then added on Twitter: “That felt phenomenal this evening, my practice was brilliant and so was the match. Daryl pushed me as always, and no I’m not singing. Now to rest so I’m fresh and ready for tomorrow. Leverkusen you were rocking tonight.”

Is Michael van Gerwen the best player in darts at present? Have your say in the comments section below

Then, this morning ahead of his match with Clayton, he tweeted again: “Had a great nights sleep and feeling well rested for the day ahead. One game at a time as you can never overlook anyone. Thank you for all the amazing messages overnight let’s go Leverkusen.”