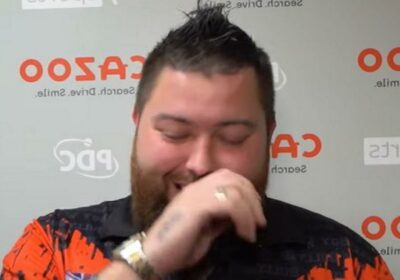 At the ninth time of asking, Michael Smith finally won a major final with a dominant victory over Nathan Aspinall at the Grand Slam of Darts.

Bully Boy had suffered eight defeats in the finals of majors, as well as suffering a number of painful semi-final exits. But that was all forgotten as he held the famous Eric Bristow Trophy aloft before celebrating with his family.

However, Smith jokingly admitted he was close to kicking his wife and two sons out of the arena in Wolverhampton, having banned them from attending his semi-final win over Raymond van Barneveld earlier in the day.

“They were banned for semis because every time I made the semis [and they were there] I got beat,” he said. “They then came down for the final. The way it started off, I thought ‘they’re going!’. I told Junior [one of his sons] to shut up twice because he was screaming!

“And it is good to have them there to witness that because it wouldn’t have been nice them being at home and me here celebrating on my own.”

Can Michael Smith win the World Championship? Tell us in the comments section below.

On finally becoming a major champion, Smith said: “It is hard when you’re the only person in the top 10 [of the rankings] not to win a [major] title. I’ve been there in the top 10 for six or seven years and it does get to be a pain in the a*** when people keep asking ‘when are you going to win one?’ and you get beat in another [final].

“Look what this tournament did for [Gerwyn] Price when he won his first one, he went on to become a world champion. [Michael] Van Gerwen when he won the Grand Prix [for the first time in 2012]… I was never going to start with the Grand Prix because I can’t get past the first round! But now it’s my time.”