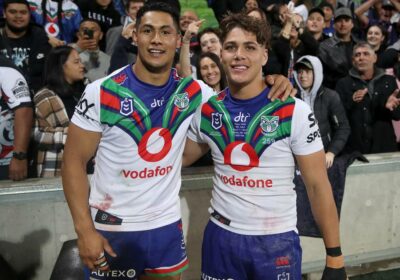 Reece Walsh is set to play his second game in the space of eight days for the Warriors, but let’s hope that doesn’t become the norm this season.

There is plenty of excitement about Walsh, for good reason, after what he showed on debut against the Storm.

Walsh is an obvious gem – but diamonds need time to shine.

And he has hardly played any senior football.

Before last Sunday’s match against the Storm, he had only played three games; a pre-season trial with the Broncos and Queensland Cup matches with the Norths Devils and Redcliffe.

Walsh didn’t take the field at all in 2020, with development grades canned due to Covid-19.

Michael Owen was a wunderkind, but peaked far too young, never quite the same after injuries. Freddy Adu never recovered from the hype of making his MLS debut at 14, while Tracy Austin won two US Open titles as a teenager but her body began to break down by the age of 20.

With young athletes, it’s important they are physically, mentally and emotionally ready.

Walsh needs time to become accustomed to the demands of the NRL. Especially the non-stop 2021 version of the game, with an unprecedented number of injuries.

He’s a sparkling talent, but timing is everything and there should be no rush.

It’s a bonus to have him this season, but it’s much more important that he is firing from 2022 and beyond as Roger Tuivasa-Sheck’s replacement.

It’s not straightforward, because the ambitious Walsh might want to play as much as possible, but it will take good management.

He’s a long-term project, rather than a short-term fix due to injuries and roster issues this year, and his ascent needs to be carefully managed.

There was a longer apprenticeship, with the Under-21 competition and an established reserve grade system.

There were exceptions, like schoolboy Cronulla Shark Andrew Ettingshausen, who coach Jack Gibson once said was so fast that he could switch the light off and get in bed before it was dark.

Brad Fittler was a first grader at 18, as was Stacey Jones for the Warriors in 1995.

But there are other cautionary tales.

Kiwi Gene Ngamu was thrown into first grade at Manly as an 18-year-old – with an avalanche of publicity – but it was too much, too soon and his career only got going a few years later.

Benji Marshall had freakish talents as a teenager but also suffered immensely as his body adapted, with two shoulder dislocations in 2004 alone.

Jordan Rankin is an extreme example, debuting as a 16-year-old for the Gold Coast Titans, but only managing 16 games over the following five seasons.

The Warriors have showed patience in the past.

Shaun Johnson was tipped for big things from his first Under-20s game in 2009, but his NRL debut came in June 2011.

Isaiah Papali’i was a shock selection in round one of the 2017 season, but the 18-year-old was consigned to reserve grade after that, before becoming a regular in 2018.

Tuivasa-Sheck was also eased into the sport. He was given six games as a 19-year-old at the end of the Roosters’ 2012 season – when their finals hopes were already gone – before storming the NRL in 2013, off the back of a full pre-season.

Warriors coach Nathan Brown seems aware of the conundrum with the marquee talent.

“There will probably be sometimes where he needs to have a week off or a game off, and he can also play off the bench so there are a number of ways to do it,” said Brown. “I would imagine [sometimes] we’ll need to give him a week where he just has a week purely off footy and gets his body to recover.”