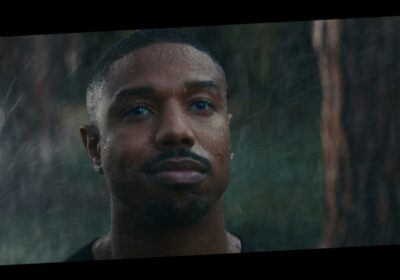 Michael B. Jordan is one of Hollywood's most recognizable stars — an accomplished actor, producer and People magazine's reigning "Sexiest Man Alive."

In a commercial that was released Tuesday and will air during Super Bowl 55, a female employee daydreams about the ideal physical form for "Alexa" and lands on Jordan, best known for his starring roles in "Creed" and "Black Panther." The employee then imagines herself in a variety of romantic and hilarious situations with Jordan, often to the chagrin of her husband.

Jordan told USA TODAY Sports that the scenes in the final commercial represent just part of the footage that generated laughter on set. Several other sequences, including one in which Jordan speaks French, were left on the cutting-room floor, he said.

"The crazy thing about shooting this spot, there's a lot of things that don’t make it to the (final) spot," Jordan said. "The guy that plays the husband is freaking hilarious. A lot of his reactions, just the way we were all working that day, it was pretty funny."

Amazon is still a relative newcomer to Super Bowl advertising after making its debut just five years ago, but it has already emerged as a perennial contender in USA TODAY's Ad Meter, which ranks Super Bowl ads by consumer rating.

Michael B. Jordan stars in "Alexa's Body," a 60-second commercial from Amazon that will air during Super Bowl 55. (Photo: Courtesy of Amazon)

"You just have so many memorable Super Bowl commercials going back over the years," he said. "Being a part of (one), it's a bucket list type thing to check off, you know? Like, 'OK, cool, I was part of a Super Bowl moment.' … It's pretty cool to be a part of that."

RATE EVERY COMMERCIAL: Become an Ad Meter panelist, vote on every ad and be entered to win a trip to the big game in 2022. See official rules for details.

Jordan said he doesn't have any noteworthy plans for Super Bowl Sunday, when the ad will air in the fourth quarter. "I'm in New York, so it's locked down over here," he said. But he's looking forward to seeing the Amazon spot hopefully bring some humor to a slate of commercials that experts believe could have a more serious tone than in recent years.

"There’s going to be a variety of brands going spot on (about the challenges of 2020), taking that route," Jordan said, "but then I think there’s room for levity and having moments to laugh and smile."