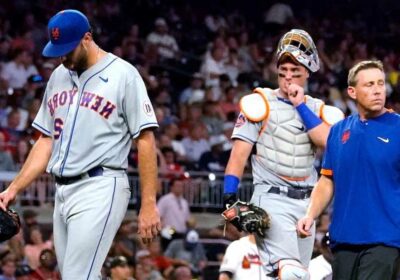 Snakebit Met’s season is over

ATLANTA — Not only were the Mets bloodied Wednesday night, but they took a potentially stinging hit to the right side.

The scramble to fill the starting rotation became more pronounced as David Peterson departed the mound with the trainer in the fourth inning, ending a brutal performance. The left-hander exited with right side soreness, adding injury to insult in a 20-2 loss to the Braves at Truist Park.

Though Peterson has struggled for much of the season — his ERA surged to a 5.40 after a performance in which he allowed five earned runs on eight hits and one walk over three innings — the Mets are already trying to survive with razor-thin rotation depth.

Missing pieces include Carlos Carrasco, Noah Syndergaard, Joey Lucchesi and Jordan Yamamoto, with rookie Tylor Megill recently thrust into a rotation spot. If Peterson needs an injured list stint, the Mets will have to dig even deeper and perhaps look toward Corey Oswalt, who has looked sharp in a long-relief role, or perhaps test Thomas Szapucki, who entered in relief and surrendered six earned runs in 3 ²/₃ innings in his major league debut. Albert Almora Jr., was summoned from center field to pitch in the eighth and allowed three earned runs over two-thirds of an inning. The Mets began the night with a plus 16 in runs differential. They ended it at minus two.

The game turned into a runaway in the fourth, when the Braves scored seven runs. Most of the damage came against Sean Reid-Foley, an extra reliever added to the roster this week with Marcus Stroman on the bereavement list following the passing of his grandmother. Reid-Foley recorded only one out and allowed five runs on five hits and one walk.

The Mets lost for the 10th time in 16 games, failing to capitalize from the momentum of a comeback victory on Tuesday night. Their NL East lead has shriveled to two games, as the Nationals continue a surge.

Pete Alonso’s two-run homer in the first against Max Fried got the Mets headed in the right direction, but it all went downhill from there.

Peterson had provided the Mets with three straight solid performances following a clunker in Baltimore three weeks ago, but got jumped from the start. Ronald Acuna Jr. blasted a homer leading off the game for the Braves and before the inning was complete a second run had scored on Ozzie Albies’ RBI single.

Austin Riley delivered a two-run single in the third that gave the Braves a 4-2 lead. Peterson had struck out Acuna to begin the inning but then walked Freddie Freeman and surrendered a single to Albies, who stole second.

The Mets will still have an opportunity to win this series on Thursday, when ace Jacob deGrom is scheduled to start. Taijuan Walker and Stroman are then aligned to face the Yankees in the Subway Series, with the rookie Megill scheduled for Sunday night. If Peterson can’t pitch Monday, the most obvious candidate against the Brewers would be the right-hander Oswalt, who has allowed one run over 6 ¹/₃ innings of relief since returning to the major league roster.