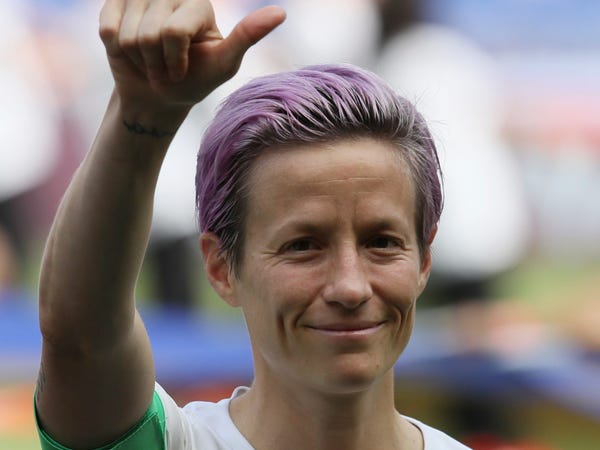 Alabama Crimson Tide senior Taylor Morgan knew she'd face a range of reactions when she decided to kneel during the national anthem, but she couldn't have possibly anticipated the star power that would come to her defense.

US Women's National Team superstar and 2019 Ballon d'Or winner Megan Rapinoe expressed her support for Morgan and her Crimson Tide teammates who kneeled in support of the fight against systemic racism before their season opener against the Tennessee Volunteers Saturday afternoon. Rapinoe was one of the first professional athletes to kneel in solidarity with then-San Francisco 49ers quarterback Colin Kaepernick when he began kneeling in 2016.

"We are with you @taylormorgz keep walking in that strength, and doing the right thing. #BlackLivesMatter" Rapinoe wrote on Twitter.

The messages of encouragement came in response to a statement Morgan released on Twitter after the game. As expected, some fans expressed outrage at her and her teammates for "disrespecting the flag and the military." The Alabama midfielder shared her reasoning for making "one of the easiest decisions I've ever made" in a post.

"By kneeling, it was in no way meant as a disrespect to the flag nor the military; which both my father and my brother are a part of," Morgan wrote. "In fact, I did this for them. I did this for the millions of African Americans like them that are being oppressed."

Morgan further explained that she is mixed race and that she wants to use her privelege "to support those who lack it."

"The fight against systemic racism is far from over, but I can assure you that change is coming, and I will be apart of making sure it does," she concluded.

WVUA 23 weekend sports anchor and Alabama senior William Galloway captured and shared a clip of Morgan and her teammates kneeling prior to the game. He wrote that while the majority of Morgan's teammates stood for the anthem, all of the players "were supportive of each other and were connected."

The Crimson Tide went on to win Saturday's contest 3-1. Morgan and company will return to the field Friday to take on the Mississippi State Bulldogs on their home turf.