Eileen Cikamatana, one of Australia's best weightlifting medal chances for the Tokyo 2020 Olympic Games should she be allowed to compete, has broken three junior world records in China.

It comes as the Australian Weightlifting Federation consider enlisting the help of Australian Olympic Committee president John Coates to get Cikimatana to Tokyo given she is currently not allowed to compete due to a technicality. 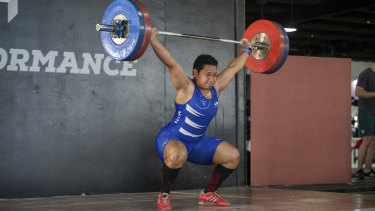 She narrowly missed a fourth world record in the snatch (119). Thursday was Cikamatana's last competition at junior level.

She will move up to the 87-kilogram weight division for a January 2020 Grand Prix event in Rome, where she will continue her bid to be allowed to compete at the 2020 Olympics.

Cikamatana switched nationalities from Fiji to Australia earlier this year following a dispute with the former’s weightlifting federation.

During that process she was briefly unable to compete. To be eligible for the Olympics weightlifters must compete in three separate three-month periods leading up to the Games to satisfy drug testers, one of which she missed due to switching nationalities.

Cikamatana was still drug tested in that time and passed.

Australian Weightlifting Federation president Sam Coffa said that Cikamatana's performance strengthened the argument to allow her to go to Tokyo.

“Everyone is starting to come out of the warm-up area to watch her. They know they are seeing something that is a force of nature," Coffa said.

“If it was a matter of simply doing the lifts required she would have easily qualified. There is no one, absolutely no one in Oceania, that can go anywhere near her.

“She ranks inside the first eight in the world for the senior 87-kilogram category and is the No. 1 junior.

“When Paul Coffa [Eileen’s coach] comes back we will think about paying a visit to [Australian Olympic Committee president] John Coates to see if there is any hope of doing anything because we do not believe the the president of the International Weightlifting Federation will do us any favours."

Cikamatana said in November that she wasn't holding out hope of going to Tokyo.

"Right now, I don't think I have that much chance [of making the 2020 Olympics], so I am just concentrating on the Commonwealth Games in 2022 and the 2024 Olympics, and competing in every world championships and competition I can," she said.

"The Olympics in 2020, that's not in my mind. The whole world is in front of me so I can take the opportunities I can."