McLaughlin Beats Muhammad to the Gold in the 400 Hurdles 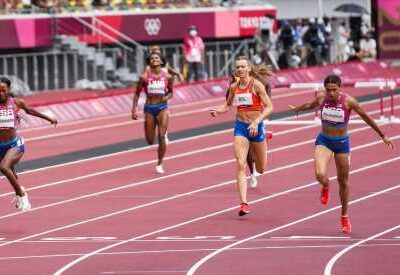 Two Americans broke the world record in an event they dominate. But only one could be first. 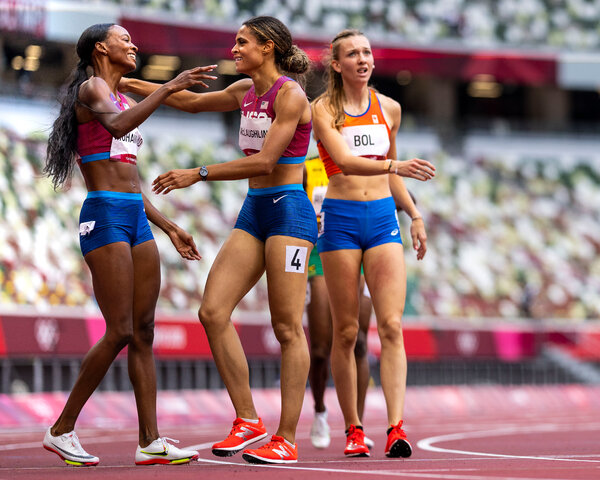 TOKYO — Sydney McLaughlin likes to say that “iron sharpens iron” when it comes to her relationship with Dalilah Muhammad. They are the premier practitioners of their craft, the two fastest women ever to run the 400-meter hurdles.

The thinnest of margins have separated the two Americans, and it was no different as they bore down on the finish line in the final at the Tokyo Games on Wednesday morning. As Muhammad approached the 10th and final hurdle, she had a slight lead. But Muhammad also understood that there was no margin for error, not with McLaughlin three lanes to her left.

And that was all it took, really: one small misstep. Muhammad could sense that she was carrying too much speed into her final hurdle, and she had to shorten her stride before clearing it, which slowed her momentum.

Muhammad still wound up running the second-fastest time in history. But against McLaughlin, that was not fast enough.

A one-time prodigy, McLaughlin, 21, broke her own world record to win her first Olympic gold, finishing in 51.46 seconds to edge Muhammad, the defending Olympic champion, by 0.12 of a second.

Femke Bol of the Netherlands won the bronze in a time that would have been a world record less than two months ago.

“It hasn’t hit me yet,” McLaughlin said.

The world is witnessing a hurdling renaissance thanks to a group of athletes who are doing things that were once considered incomprehensible. McLaughlin and Muhammad, 31, arrived for their race with fresh memories of Tuesday’s final of the men’s 400-meter hurdles, a race won by Karsten Warholm of Norway that similarly rewrote the record book.

“It definitely sparked a little bit of energy and adrenaline,” McLaughlin said of seeing the men’s record fall.

Quick track? Fancy shoes? The fast times at these Olympics are likely the result of a combination of factors, though the athletes are “pushing the boundaries of what’s possible,” McLaughlin said. 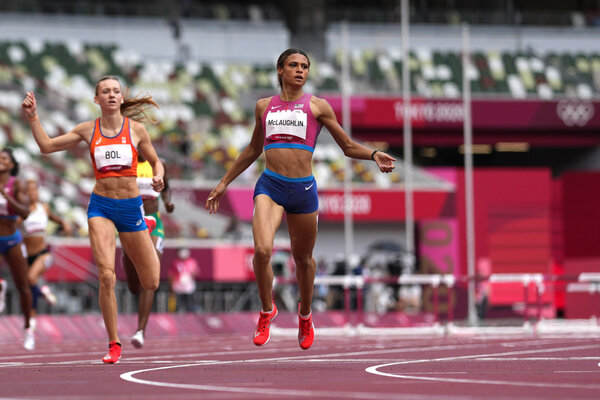 How Sydney McLaughlin Beat Her Own World Record to Win Gold

On a fast track at the Tokyo Olympic Stadium, McLaughlin edged her closest rival in the final meters and shaved 0.44 of a second off her own world record.

In the process, McLaughlin has fulfilled the outsize expectations that have shadowed her since she was a teenager in New Jersey. Her path was not always smooth. Five years ago, ahead of the 2016 Olympics, McLaughlin was 16 and feeling the immensity of the challenge when she told her coaches that she was too anxious to race at the United States trials.

And while she still found the strength to compete there and qualify for her first Olympic team, she later felt swept up by everything that was happening around her in Rio de Janeiro and failed to advance out of her semifinal heat.

McLaughlin has since found comfort through her faith, she said. She also established herself as the best in her profession when she broke Muhammad’s world record at the Olympic trials in June. In Tokyo, she insulated herself by avoiding social media and creating a familiar routine. She stayed in her room. She spoke with friends and family. She focused on her goals.

“I think when you have a lot of outside voices coming in, it can definitely alter what you have going on internally,” she said. “The more I can distance myself from that, the more I can stay as calm and as relaxed as possible.”

Muhammad has coped with her share of adversity. After she outraced McLaughlin at the 2019 world championships, her training was hampered by hamstring injuries. Then, she tested positive for the coronavirus in February.

“It’s been such a crazy time,” she said, “just with Covid and trying to battle that, and not knowing if I would be able to get here. In hindsight, I think it might have helped because it made me push even more.”

Muhammad knew that repeating as Olympic champion would require an absurd time. Her coach, Lawrence Johnson, who is known as Boogie, told her in training that he believed she could run the race in 51.70, an improvement on McLaughlin’s existing world record by two-tenths of a second.

“And I was like, ‘Is that fast enough?’” she recalled.

Her doubts proved prophetic. McLaughlin and Muhammad have made it a tough era for everyone else. Anna Cockrell, their American teammate, was disqualified for stepping out of her lane. But the race otherwise felt familiar to her.

“It’s like third world-record race I’ve been in,” Cockrell said, “so it would be nicer to be closer to the front.”

In her own way, McLaughlin could relate. She spent the early part of the year refining her technique by running the 60- and 100-meter hurdles at the behest of her coach, Bob Kersee. Leading with her off foot, which was another Kersee directive, she placed last in her first indoor race of the season.

“Sometimes you have to lose in order to win,” she said.

She slowly gained experience and confidence, and her form improved. Above all, she said, the idea was to “feel the rhythm of running faster.”

On Wednesday, she was the fastest ever.