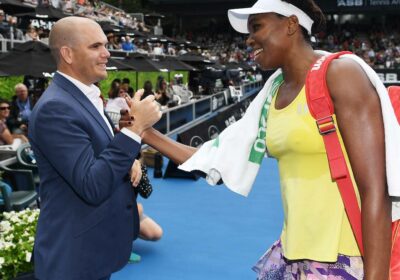 When Karl Budge became ASB Classic and Heineken Open tournament director in 2012, the WTA and ATP events in Auckland were established successful ‘small’ events on the Tour calendar.

The tournaments had revenue of about $5 million but made no profit.

They regularly attracted a smattering of the world’s top players, primarily due to their proximity to the Australian Open. Auckland was known as the ‘friendly’ tournament, with volunteers second to none, the players were comfortable.

The women’s tournament director Richard Palmer was affable. He would go to the US Open armed with tourism packs he dished out to every player. In his last year in charge in 2011, former world number one Maria Sharapova graced the Stanley Street courts, while the men’s event had attracted the likes of Rafael Nadal and Andy Murray as youngsters, and Roger Federer played on an outside court as a teenager before he was known.

Long-time tournament director Graham Pearce had always stated a goal of securing at least two top 20 players. The tournaments were fun to cover, relaxed and low key. The players mingled regularly with the public.

But 2012 heralded somewhat of a revolution. Then Tennis Auckland CEO Robyn Kiddle had approached Budge in London in 2011 while he was working in the English Premier League. Having previously worked at Tennis Australia and for the WTA Tour, Budge didn’t hesitate in agreeing to return home, describing it as the ‘ itch that needed scratching.’

He brought commercial acumen from his previous roles in tennis and also a contact base that included top ranked women’s players Ana Ivanovic and Caroline Wozniacki who were personal friends.

Budge had a vision to create a mini Grand Slam at the ASB Tennis Arena. Attracting high calibre players was only part of the picture. Budge put a lot of emphasis on enhancing the professional environment for the players.

The ASB Tennis Arena could best be described as a bit part stadium, mixing the new (The Next generation club) with the old, the decaying Yock and Robinson stands. The Western Yock stand was finally replaced in time for his last tournament in charge in 2020.

He initially brought in Sky City to do the catering, enhancing the food and beverage offering for the players, fans and corporates. There were inevitable teething problems but each year there were improvements.

The Serve area stretching into the domain was Budge’s brainchild and it grew every year providing fans with additional space, entertainment and a relaxed atmosphere to watch the tennis on a big screen.

The tournaments won numerous ATP and WTA awards for best ATP 250 event and best WTA International series event over the years. While Budge could never compete with the financial resources of Tennis Australia, the Middle East and Chinese events in signing players, through his bargaining skills, negotiating, innovation and understanding how the professional tennis world worked, he was able to lure for the women’s tournament in particular a list befitting hall of fame status.

No one gave him a chance of signing the greatest women’s player of all time Serena Williams to Auckland but after effectively luring her legendary sister Venus who would play here five times, Serena was signed for the 2017 tournament, and on her second appearance won the last edition of the Classic held in 2020. Budge’s friendship with Wozniacki and Ivanovic paid dividends with the former spending the last six years of her career playing in Auckland before her retirement.

But it was arguably not a household name who influenced Budge the most, two times champion Julia Goerges, a top 20 ranked German was loyal to the event throughout her career and a player who Budge considers one of his closest friends. Her decision to retire last year impacted Budge perhaps more than the disruption and subsequent cancellation of this year’s tournaments due to Covid-19.

It was time to do something else. The men’s event was harder to secure the very best in the business with most of the top 10 always opting to practice instead of play the week before the Australian Open. But Budge always beat the rival Sydney International and one year signed seven of the world’s top 20. The likes of Dominic Thiem, Stefanos Tsitsipas and rising Canadian star Denis Shapovalov have played on centre court.

Budge had a knack of luring the Next Gen stars. A last minute wildcard to Italian 18-year-old Jannik Sinner in 2020 is an enduring memory, a player destined for the very top of the game.

The 2020 tournaments sold out 17 of the 20 sessions. In his nine years in charge Budge had grown revenue from $5 million to $9 million and from no profit to a seven figure sum.

He has few regrets, perhaps the failure to lure Roger Federer being the big one. But while he wasn’t quite the miracle maker, he came pretty close.

His successor whoever that may be faces a huge challenge in this Covid environment but will no doubt take comfort in the fact Budge will be ready to help with the likes of player recruitment if called upon.