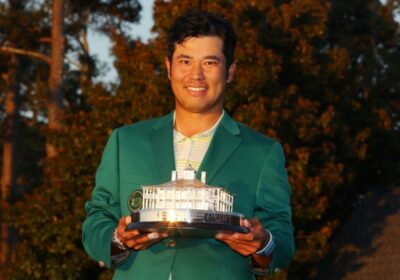 As history beckoned at Augusta, even a four-shot lead could not suppress the angst that swirled in the air and, for a second, threatened to blow Hideki Matsuyama towards the most disastrous of footnotes. For so long on Sunday, he had treated the whispers of collapse with deafening silence, with the chasing pack receding into the long afternoon shadows in Georgia. But on the 15th fairway, he invoked vestiges of golf’s worst unravellings, recklessly taking on the par-5 and succeeding only in finding the water at the back of the green.

From a position of imperious dominance, a one-paced Masters suddenly swung towards a knife-edge. Yet, at the crucial moment, Xander Schauffele, Matsuyama’s playing partner and closest challenger, turned the sword on himself at the 16th, finding the water and making a triple bogey. With a two-shot cushion but nerves fraying like old feathers, Matsuyama drew on every ounce of resilience to cling to victory and become the first Japanese man in history to win a major.

As he walked off the 18th green, the emotions finally told. Matsuyama has long been an icon for a country enamoured with golf. Finally, after so many agonising near-misses, he has fulfilled the prophecies that were born when he finished as the low amateur at Augusta a decade ago. Forever in a relentless spotlight, it is a shame that his most ardent supporters were unable to see him reach the sport’s pinnacle at last. “Hideki in Japan – he’s a bit like a Tiger Woods to the rest of the world,” Adam Scott, the 2013 champion, said after closing out his fourth round earlier in the day.

“I’m really happy. My nerves didn’t start on the second nine, it was right from the start and right to the very last putt,” Matsuyama said. “I was thinking about my family all the way round today and I’m really happy that I played well for them. Hopefully I’ll be a pioneer in this and many other Japanese will follow and I’m glad to be able to open the floodgates hopefully and many more will follow me.”

It was a dramatic finale to what had otherwise been a day desperately short of suspense. After a 77-minute rain delay on Saturday, Matsuyama took advantage of the softened greens and stormed four shots clear of the field with a blistering back nine. There were, though, inevitably nerves on the first tee and his drive veered deep into the pine straw. Almost immediately, as Will Zalatoris started with back-to-back birdies, entirely undaunted by the prospect of becoming the first winning debutant in 42 years, Matsuyama’s advantage was reduced to just one.

But what promised to become a wide-open race instead became one man’s procession. To end the early apprehension, Matsuyama responded clinically at the second with a wonderful up-and-down for birdie from the front bunker. From thereon, the tricky opening stretch was navigated in serene fashion, his irons once again steady and sublime. Without any serious charge from behind, the lead was consolidated again at the par-5 eighth before an exquisite approach at the far trickier ninth. Making the turn in 34, a healthy slice of daylight restored, it was little more than an exhibition.

Matsuyama had already expressed his relief earlier this week that not quite so many Japanese reporters had made the journey to Augusta this year, his free hours spent at peace rather than faced with another firing line of questions. But soon the pressure started to tell as the horizon came into view on the back nine. The first cracks emerged at the 12th, where he dropped a shot after finding the back bunker. From there, he benefited from two huge helpings of luck as his drive kicked out of the trees and an overhit approach coursed over the back of the green on pure adrenaline and stopped only just short of the azalea bushes.

Up ahead, Zalatoris remained steadfast in pursuit while Schauffele picked up the slipstream, even if the likes of Justin Rose and Jordan Spieth had long faded out of contention. If Matsuyama’s anxiety was unsurprising, for a while his smile belied the gravity of the situation. Soon, though, the nerves became impossible to disguise.

It would have been a dreadful and underserved ending had he not held on, but after Schauffele unravelled, Matsuyama regained his composure to come home with just one shot to spare. It might have been a stumble over the line, but such measured brilliance earlier this week afforded him the saving grace. This was a victory that will reverberate across the golfing landscape, no doubt inciting another boom of popularity in Asia, where there is already such a rich depth of exceptional female players. It is a burden of expectation Matsuyama has long attempted to live up to. With a sigh of relief and a few stifled tears, it was finally alleviated on the greatest stage of them all.