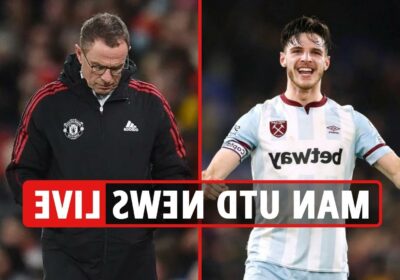 MANCHESTER UNITED have been urged to splash the cash on Declan Rice after SunSport revealed the club are confident of landing the England man next summer.

West Ham have slapped a stunning £100m asking price on the Three Lions star, but the Red Devils are confident of tempting him up to the North West.

Meanwhile, Ralf Rangnick is losing the dressing room after his sides dismal 1-0 defeat to Wolves on Monday.

SunSport can exclusively reveal that the interim boss has a reputation for being aloof and overconfident.

And United players have also openly admitted to the hierarchy that they should have appointed Antonio Conte before he joined Tottenham.

We've also the very latest on Erling Haaland as Premier League clubs continue to eye a swoop for the Dortmund superstar.