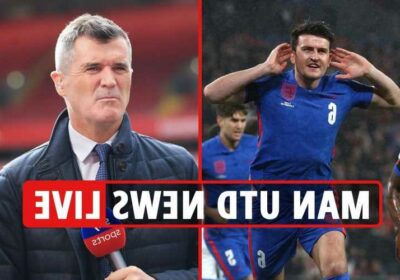 MANCHESTER UNITED are back in Premier League action this weekend at Watford following the international break.

But there is reportedly discontent behind the scenes, with eight players feeling they've been 'misled' over their first-team chances this season.

And to make matters worse for Ole Gunnar Solskjaer, one journalist has reported that Man Utd are in talks with Zinedine Zidane.

The Frenchman is reported to be a popular choice with Cristiano Ronaldo and Raphael Varane, both of whom he managed at Real Madrid.

However, the talks are said to be difficult as Zizou is reported to be keen on coaching a national team next.

Meanwhile Harry Maguire's sister has 'liked' an anti-Roy Keane tweet after the Man Utd legend and pundit fiercely criticised his celebration following his goal for England against Albania.

We also have the latest on Donny van de Beek's future, with Wolves said to be interested in the Dutch star.

Follow all the latest Man Utd news, transfer and gossip from Old Trafford below…