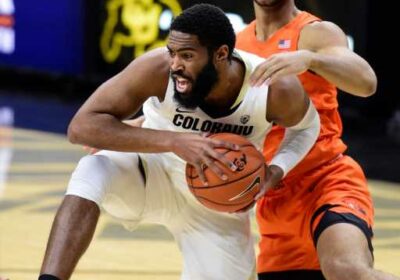 The Pac-12 Conference on Monday finally filled in the final pieces of its 2020-21 men’s basketball schedule.

For Colorado, it indeed will be a complete picture, as the long-awaited makeup date against Arizona State will be played Thursday, March 4, at the CU Events Center. For others, including two of the teams the Buffs have a slim but hardly impossible chance of tracking down in the Pac-12 standings — UCLA and Oregon — the final ledger will fall short of the 20-game league slate the Pac-12 scheduled for the first time this year.

If the games commence as planned, the Buffs will complete the regular season with a three-game homestand, culminating with the Senior Day festivities next week against Arizona State. The tipoff time has not yet been determined, and the game will air on either ESPN2 or ESPNU.

Mathematically, the Buffs still have a shot at the top seed for the conference tournament in Las Vegas, if they can win out during a homestand that begins Thursday night against No. 19 USC (7 p.m., ESPN TBD). Yet the Buffs still will require further help, and given one of the games that apparently will not happen is Oregon’s visit to UCLA, there might not be enough help available.

CU (11-6 Pac-12) begins the week three games behind Oregon (9-3), USC (12-3), and UCLA (12-3) in the loss column, but will inch closer to one of those teams after the Ducks and USC square off Monday night in Los Angeles. If Oregon wins on Monday and the Buffs can sweep the Los Angeles schools, CU will be only one loss behind the Trojans (and a season sweep in hand) with USC completing its schedule at Utah, against Stanford at home, and at UCLA. In that scenario, if USC then topped the Bruins, the Buffs would only be one loss behind UCLA with the Bruins also now facing a visit to Oregon (March 3).

The Ducks might be more difficult to catch, if only because they are scheduled to finish with just an 18-game conference schedule. Monday’s game at USC begins a demanding final two weeks for Oregon, which now is slated to play six games in 14 days ahead of the conference tournament, but will not have to host Arizona State, or visit UCLA. The Bruins are now looking at a 19-game conference schedule.

For the Buffs, the March 4 date against ASU splits the layoff time between Saturday’s game against UCLA and their first game in the Pac-12 tournament, which likely will be in the quarterfinals on March 11. With the league awarding five first-round byes in the tournament this year instead of the usual four after Arizona self-imposed a postseason ban, CU will be assured of its first first-round bye at the tournament with one more win, though even with three losses it would take an unlikely series of events for the Buffs to be surpassed for the fifth seed.

“This is a time of year where you’ve got guys that are banged up and bruised up. But it’s also a time of year when guys want to play,” CU head coach Tad Boyle said. “You find that balance of not playing too many games, but playing enough to keep you sharp. We’ll use the time wisely in terms of our time off, if we have it, to get rest and get our bodies healed up but yet stay sharp.”

Washington State’s Noah Williams was named the Pac-12 player of the week while Arizona’s Azoulas Tubelis was named the freshman of the week. Williams scored 32 points in a win against Cal and put up 40 points in a triple-overtime win against Stanford…CU’s point total in this week’s AP Top 25 vote dropped to eight after earning 30 points last week. The Buffs haven’t been ranked once this season but have received votes in each of the past 10 weeks…USC remains the only ranked Pac-12 team, dropping two spots to No. 19. Oregon (53 points) and UCLA (17 points) also received votes…The Buffs on Monday were ranked No. 21 in the NET.