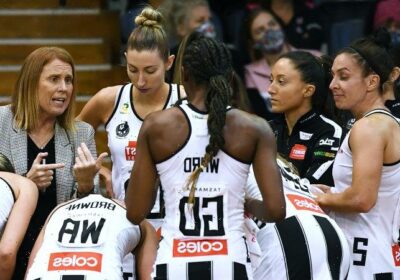 Adelaide Thunderbirds defender Shamera Sterling proved the difference as her club denied Collingwood victory in their Super Netball clash in Adelaide on Sunday.

The Jamaican import finished with eight of her side’s 14 intercepts in a 62-54 win over the Magpies, which draws the two clubs level on 3-6 records, just four points adrift of fourth-place. 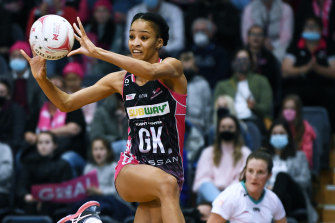 Shamera Sterling played a starring role for the Thunderbirds in their win over the Magpies.Credit:Getty Images

Magpies shooter Shimona Nelson shot 29 of 31, while Kelsey Browne had 14 goal assists but the Thunderbirds had more time in possession and finished with 16 more scoring shots, which proved the difference.

The loss came after Melbourne Vixens caused one of the upsets of the season on Saturday by beating premiership fancy Sunshine Coast Lightning 55-52 at John Cain Arena.

Magpies coach Nicole Richardson was disappointed in her side’s passing and inability to play a shorter, patient passing game to reduce Sterling’s influence.

“That’s a very disappointing result for us,” Richardson said. “We’re in a position to be able to push for that top four so it was disappointing that we let that one go. We started really well, then lost our way.

“We started to get a little bit too long and cross-court, which really played into Shamera Sterling’s hands. I think it was the third quarter where she really came alive and killed us.

“We needed to go back to playing basic, simple netball and play the short game to basically take her out of the equation.”

The Magpies lost shooter Gabby Sinclair to a quad injury before the game, while defender Jodi-Ann Ward took a knock to her knee, but Richardson said Ward didn’t have any structural issues so could potentially play next round.

The Melbourne Vixens snatched a 55-52 win in the dying moments from ladder leaders Sunshine Coast Lightning as the last-placed Victorians came from behind to win just their second game this season.

The Vixens finally reunited with their Melbourne fans at John Cain Arena on Saturday for their first time playing at home in six weeks. 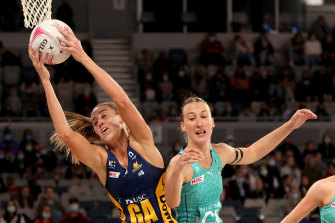 Cara Koenen of the Lightning and the Vixens’ Emily Mannix battle for possession.Credit:Getty Images

Given the unpredictable continuation of the Super Netball season with COVID restrictions, six teams are now housed in Melbourne, a welcome relief for the Vixens, having been embroiled in controversy last week after their round-eight game against West Coast Fever did not go ahead after players from the team were denied an exemption to enter Western Australia.

Three Vixens players were refused entry because they had travelled to Byron Bay in NSW from their Sunshine Coast base during their bye round. Changing border restrictions meant the players’ NSW travel was deemed a COVID risk, and the Vixens refused to abandon the players, leading to a postponement of the game.

Vixens skipper Kate Moloney said “it has been a really big few weeks, we were on the road for quite a while and the girls are all just happy to be back. I think the club handled it all really well, and now all we can do is get out there and play”.

The Lightning came in on a high after a thrilling extra-time victory against the Magpies last week, while the Vixens welcomed back veteran defender Emily Mannix after she recovered from a fractured knuckle. 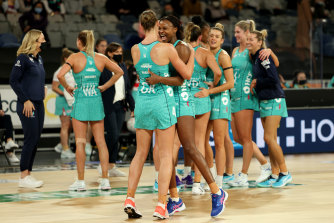 Undefeated in away games, the Lightning had a strong start, the match-up of Sunshine Coast’s Steph Wood and Vixen Jo Weston was a mainstay of the opener.

Wood came off a quiet week but the goal attack managed five goals and seven assists in the first term. Vixen Kaylia Stanton wrangled a super shot but the Lightning led by two at the first break.

Melbourne swarmed Lightning’s attack in the second but the Queenslanders continued their flawless goal-circle form, Cara Koenen’s 100 per cent accuracy propelling their lead to seven.

The Victorians then came out with purpose, slicing the margin by five in two minutes, but despite winning the quarter, Lightning had clawed back a six-goal lead, partly attributable to their opponent’s 58 penalties at three-quarter-time.

In the fourth term Stanton continue her clinical performance, slotting a super shot immediately after Mwai Kumwenda, to put the Vixens just one point behind.

Kumwenda had the crowd on their feet, as they took the lead for the first time all day. Two more goals and the burglary was complete, the Vixens seizing the victory by three goals and Stanton named player of the match.