The joy of the Dodgers’ long coveted World Series title was overshadowed on Tuesday night when Justin Turner, the team’s veteran third baseman, joined his teammates in celebration on the field shortly after learning he had tested positive for the coronavirus.

Turner’s return to the field, which occurred right in front of Rob Manfred, Major League Baseball’s commissioner, at Globe Life Field in Arlington, Texas, raised questions about how the league had allowed such a public lapse in its coronavirus protocols and drew widespread criticism from experts in epidemiology.

M.L.B. said on Wednesday afternoon that it would investigate the incident, but placed the blame squarely on Turner, saying he had refused the orders of league security to remain in isolation.

“Turner was placed into isolation for the safety of those around him,” M.L.B. said in a statement.

“However, following the Dodgers’ victory, it is clear that Turner chose to disregard the agreed-upon joint protocols and the instructions he was given regarding the safety and protection of others. While a desire to celebrate is understandable, Turner’s decision to leave isolation and enter the field was wrong and put everyone he came in contact with at risk. When M.L.B. Security raised the matter of being on the field with Turner, he emphatically refused to comply.”

The Dodgers had pulled Turner, 35, from the game when they learned of his positive test before the eighth inning, but he came back onto the field during the postgame celebration. He was seen kissing his wife, holding the World Series trophy, and hugging and talking to teammates — sometimes with a mask, sometimes without. And he took his place at the center of a team photograph, sitting between Manager Dave Roberts and Andrew Friedman, the Dodgers’ president of baseball operations — none of whom wore a face covering during the photo shoot. 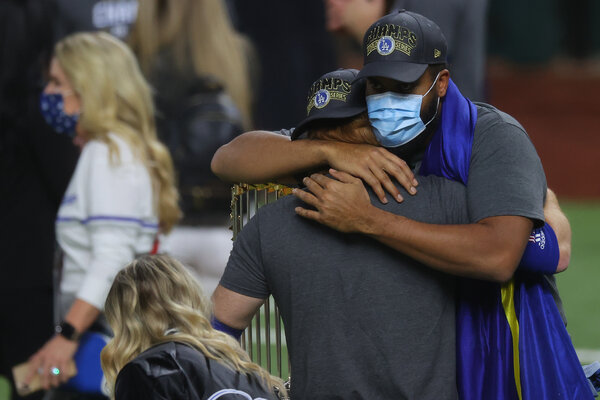 According to Dr. John Swartzberg, an infectious disease expert and professor emeritus at the University of California, Berkeley, who has consulted the Pac-12 Conference on coronavirus guidelines, the fact that the team knew to pull Turner from the game should have been sufficient reason to keep him off the field for celebrations, especially as he could have exposed more people to the virus than he had before.

Turner, who joined the Dodgers in 2014, has been one of their leaders and best players, particularly in the postseason. Friedman admitted the scene on the field made for bad optics, but he said everyone in the Dodgers’ so-called postseason bubble had already been exposed to Turner and seemed to suggest that sentimentality for a beloved player influenced the situation — especially with his contract expiring after the World Series.

“For him, just being a free agent, not knowing exactly how the future is going to play out, I don’t think there was anyone who was going to stop him,” Friedman said.

The players’ union said it was also gathering facts about the incident but had no further comment. Turner did not speak to reporters after the game, though he wrote on Twitter that he felt “great, no symptoms at all.”

Teams have been subject to regular testing since the season began in July, a process that was jointly negotiated between the league and the players’ union. Several players tested positive early in the season, and more than 40 games were postponed because of virus cases. In an effort to prevent the spread of the virus, the final three rounds of the postseason were held in four contained environments at neutral-site stadiums in Houston, San Diego, Los Angeles, and Arlington, Texas.

Teams were restricted to hotels that were closed to the public, and they were taken to and from the stadium, forbidden from going anywhere else. Players’ wives and children were allowed to join them as long as they had quarantined, and many of the Dodgers’ immediate family members were on the field after Tuesday’s game.

Multiple news media reports said that Turner’s test from Monday had come back “inconclusive” during the second inning of Tuesday’s game. That led the league to expedite processing Turner’s test from Tuesday morning, which came back positive.

Some doctors said the delay in accessing the results significantly reduced the effectiveness of testing.

“The test result should be back before they started playing,” said Dr. Abraar Karan, a physician at Brigham and Women’s Hospital and global health researcher at Harvard Medical School. “That’s the whole point of testing to begin with.”

M.L.B. said on Wednesday that the Dodgers’ entire traveling party had been tested after Tuesday’s game and that both them and the Tampa Bay Rays were tested again in the morning. It said “appropriate authorities” would determine whether the teams could travel or not, but did not specify which ones. The Los Angeles County Department of Public Health said that it was working with the Dodgers to prevent additional exposures and that it had “provided direction on the required quarantine of players and staff that are close contacts.”

Guidelines from the Centers for Disease Control and Prevention state that anyone who has been within six feet of a person who has the coronavirus for at least 15 minutes over a period of 24 hours should isolate for 14 days, regardless of whether they were wearing personal protective equipment, including masks.

“Exposure on the field is different from a World Series celebration, too,” said Catherine Troisi, an infectious disease epidemiologist at UTHealth School of Public Health in Houston. “When they’re in closer proximity, yelling and hugging, they are more likely to transmit the virus.”

Turner seemed keenly aware of the threat of the virus earlier this season. Just before M.L.B. strengthened the health and safety protocols in early August in the wake of large outbreaks within the Miami Marlins and St. Louis Cardinals, Turner helped lead a charge to tighten his club’s own behavior.

Turner sent to a reporter from SportsNet LA, the Dodgers’ broadcaster, a list of rules on July 31 that players and coaches had stressed among themselves, apart from M.L.B.’s protocols. The Dodgers-specific rules included maintaining six feet of distance, ensuring any player not in the game wasn’t in the dugout during a contest and stating that “all players will wear face coverings in the dugout.”