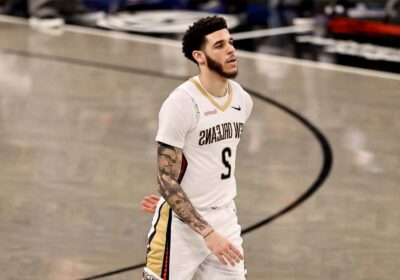 NEW ORLEANS — Pelicans point guard Lonzo Ball could have had two cracks at the Knicks in four days.

His first Knicks audition may be postponed, though, because he’s listed as doubtful for Wednesday’s matchup at Smoothie King Arena.

Don’t think team president Leon Rose and senior VP William Wesley won’t be watching intently, however, if Ball faces off against the Knicks, either Wednesday or in the rematch at the Garden on Sunday.

Ball, who has missed the past three games, is staging his breakout season at age 23, averaging 14.5 points, 5.7 assists, 4.2 rebounds and shooting a very decent 37.5 percent from 3.

The Post has reported the Knicks feel they can still use a playmaking point guard to upgrade the roster. Free agency this offseason will be their likely avenue. The Knicks will lead the NBA in cap space at $60 million.

A pass-first point guard could alleviate the heavy load on power forward Julius Randle, who does a lot of the ballhandling.

Randle and Ball were tight as former Lakers teammates. Ball, the No. 2 pick in the 2017 draft and once repped by Rose, is having his best season, improving his deep shooting and defense.

“It’s great, I love it,’’ Randle said of Ball’s emergence. “His confidence, how he’s shooting the ball, all that type of stuff. You know he does as far as defensively and how he pushes the ball, but I’m just happy he’s playing with confidence.’’

On the Ball brothers’ reality show, Lonzo was seen to be choked up when he learned the news Randle was leaving the Lakers to sign with the Pelicans.

“Damn, that one hurt a little bit,’’ Ball said on video while tapping his chest.

Ball, choked up, nodding his head.

When asked by The Post if he had seen the clip, Randle, who spent four seasons with the Lakers, said: “Yeah, I saw it. we definitely were tight. We were a close group, that team, just a lot of young guys competing every night, sort of how this team is. We’ve got young guys and vets. Just a hard-playing team, competing every night. We really saw things turn around for us the middle of the season and we were really winning games. So obviously it was tough leaving but everything happens for a reason.’’

Though the Knicks made a very light push for Ball at the March 25 trade deadline, the Bulls did a lot more of the talking with Pelicans general manager David Griffin. If Ball were to leave, Chicago would be the Knicks’ top competitor, according to sources.

Because of luxury-tax concerns, the feeling around the league is the Pelicans may pass on matching any offer over $20 million per season with rookie lottery-pick point guard Kira Lewis and combo guard Nickeil Alexander-Walker in the fold.

The Post reported Ball has the Knicks on his radar. His father, LaVar, had hoped his youngest son, LaMelo, would have been drafted by the Knicks last November — wanting him to play amid the bright lights of New York City.

A former Jets practice-squad tight end, the elder Ball has also stated he feels the Pelicans have misused his son, but the NBA cognoscenti knows the father doesn’t speak for Lonzo.