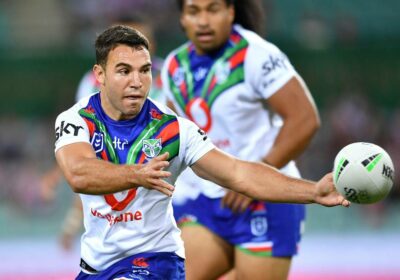 All the NRL action between the Warriors and the Sea Eagles.

The Warriors could be without Addin Fonua-Blake for much longer than expected, with reports that the star prop’s knee injury is worse than initially thought.

The 25-year-old suffered the injury during the side’s loss to the Sydney Roosters last weekend, and Warriors coach Nathan Brown said the best case scenario was that the prop would be sidelined for six to eight weeks.

However, Nine News reports Fonua-Blake could spend the rest of the season watching from the bleachers with the injury “worse than first thought” and requiring surgery.

The Warriors are yet to confirm the extent of the damage. On Thursday, assistant coach Justin Morgan said specialists were yet to decide on the best way forward and Fonua-Blake would be missing for a minimum of six weeks regardless.

“There’s no rush to get that decision made,” Morgan said. “It just needs to be the right decision.

“Because it’s an unusual injury on where it is and the impact it could have on other parts of his body, we need to make sure that if they do decide to go down the surgery path it’s the right path to go down.

“I think at the start of the week we should have a little bit more of an idea of whether or not surgery will be required.”

Fonua-Blake, who joined the club this season after a stint with the Manly Sea Eagles, had made it clear as to why he was one of the top free agents on the market late last year though his play with the Warriors.

A dominant force in the middle of the park, coach Nathan Brown conceded it would take a massive effort to replace his production.

“Basically, the only way for us to replace Addin is collectively as a group of forwards,” Brown said. “They all just pick up a little bit of slack, that is the key to it.

“Not any one player is going to come in and do what Addin does … It is more about a collective group of forwards doing a good job while Addin is out, so that when he does come back the club is in a decent position.”