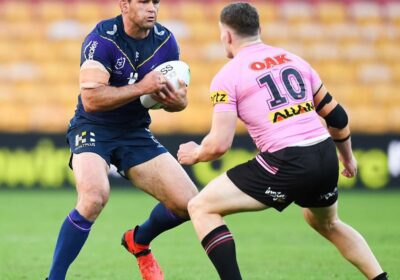 All the action between the Storm and Panthers in the second NRL semifinal.

South Sydney defeated Manly 36-16 in dominant fashion in their preliminary final on Friday night to progress through to the grand final.

The Rabbitohs were in control from the start of the game and piled on seven tries to three, with two of Manly’s consolation tries scored after the 70th minute.

The attacking onslaught came despite key playmaker Adam Reynolds suffering a groin injury in training this week, which meant he didn’t kick the ball for the game’s first 30 minutes.

It didn’t stop the Rabbitohs from going berserk, scoring the first 12 points of the match before Reynolds decided he was warmed up enough to kick.

His first kick led to a try after Reynolds’ bomb was knocked back for Damien Cook to grubber in for Walker to score his second of the night.

Reynolds ended up with three kicks for the half as Souths scored a fourth try through Jaxson Paulo in the shadow of the half and appeared to be in his rhythm late.

Manly didn’t look shocking in attack, but couldn’t get a try in the first half despite going close.

Straight after Souths’ first, Manly looked to have crossed the line when Tom Trbojevic broke the line and then put Reuben Garrick over, only for it to be pulled back for an obstruction.

The Rabbitohs stuck the boot in when Taaffe put Alex Johnston in to make it 12-0 after 23 minutes.

Manly then looked to strike again when Trbojevic did it all himself, but was deemed to have dropped the ball over the line.

The Sea Eagles scored first in the second half of the NRL preliminary final with Reuben Garrick strolling over after three minutes to put some life in the game.

While the “Manly didn’t get off the bus” jokes were quick to spread after Souths’ dominant first half, the Sea Eagles appeared to be inspired out of the break.

A no-look pass from Josh Schuster hit Garrick on the chest to cross untouched.

But the Sea Eagles may have had the adrenaline pumping just a bit too much, with unforced errors out of their own end allowing the Rabbitohs to get into position.

And Campbell Graham barged over to make it 28-6 in the 52nd minute.

The Rabbitohs rubbed it in when Jaxson Paulo scored his second of the night, catching another Reynolds bomb but being stuck backing his away to the line.

On Nine, they said Paulo was “moonwalking” his way to score the try, making it 32-6 with less than 20 minutes left.

Two late tries through Trbojevic and Garrick added some respectability to the scoreline but the Rabbitohs dominated the match from the outset.