Super Netball’s top two have been confirmed with one round remaining, after the Sunshine Coast Lightning overcame a 10-goal second quarter deficit to defeat the third-placed Melbourne Vixens 56-55 in dramatic fashion at Melbourne Arena.

A Steph Wood penalty goal with just two seconds remaining broke the deadlock, and confirmed a six-point haul – including two bonus points – that pushed the Lightning into top spot ahead of the NSW Swifts. 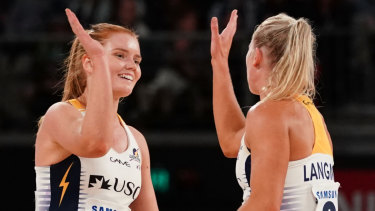 Stephanie Wood celebrates with Laura Langman after shooting the match-winning goal for Sunshine Coast in their round 13 clash against the Vixens at Melbourne Arena.Credit:AAP

The Vixens took just the opening bonus point, their attack end failing to fire in a disappointing second half, and a minor semi-final appearance now guaranteed ahead of their final round derby against the Magpies.

Fourth spot is still to be decided between the Giants and Magpies, who remained one point apart after seven-point games for both over the weekend, but, for the major semi-finalists, only the order can now change.

The Lightning’s victory was their seventh in succession – their previous loss having come at home against the Vixens 62-52 in round six. But the Vixens salvaged just one point in an underwhelming performance in the previous round against the Swifts, and their second straight defeat was their fourth of the year.

It had all started so brightly. They held a 12-6 advantage shortly before Lightning coach Noeline Taurua was prompted to make her first positional manoeuvre, benching Diamonds’ goal attack Steph Wood for Peace Proscovia and pushing Cara Koenen out from shooter. 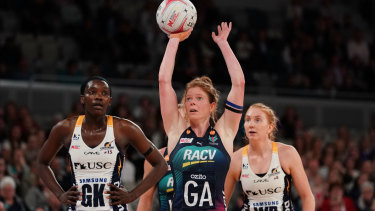 Vixen Tegan Philp sets up for a shot against the Lightning.Credit:AAP

Initially, it made little difference, such was the hosts’ defensive intensity and workrate, but the Vixens may rue the closing minutes of the second quarter when, leading 30-20, they conceded five of the next six and let slip the bonus point that had seemed well within their grasp.

The Lightning finally had some momentum, and Wood back on court after the main break, too – this time in partnership with an increasingly influential Proscovia. Despite falling behind by nine goals in the early stages of the third, the Lightning again finished more strongly, shutting down the Vixens’ attack and capitalising better on the increased amount of turnover ball gained.

By winning the quarter 16-14, the margin was trimmed to four overall, prompting Vixens’ coach Simone McKinnis to bench Caitlin Thwaites (24/26) for Mwai Kumwenda. But before the Malawian had made her first scoring attempt, the scores were level, at 46-46 with 12 minutes to play.

The Lightning pushed that out to three, but the Vixens levelled again with a Tegan Phillip goal inside the last 30 seconds. But the Lightning were able to score off their final centre pass, closing each quarter impressively, and ultimately one goal ahead. 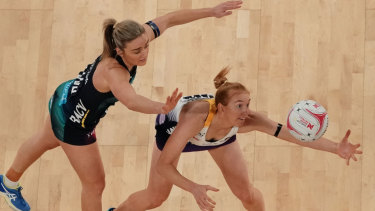 Liz Watson of the Vixens defends as Madeline McAuliffe of the Lightning takes possession.Credit:AAP

Each game in next weekend’s final round will play a part in shaping the composition of the top four: Giants v Fever, Swifts v Firebirds, Lightning v Thunderbirds on Saturday and Magpies v Vixens on Sunday.

Meantime, Magpies midcourter Kelsey Browne is expected to have scans on Monday on her injured left knee, having suffered what is feared to be an ACL rupture during the six-goal defeat of of the Swifts in Launceston.