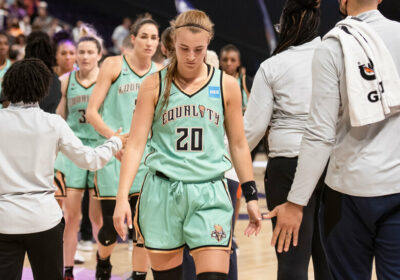 The dramatic ending of the Liberty’s first trip to the playoffs since 2017 evoked memories of the start of this season.

In the opener against Indiana, Sabrina Ionescu nailed a game-winning 3-pointer from the wing at Barclays Center with four-tenths of a second left and sent expectations soaring into the rafters. The Liberty started the season 5-1 and looked like a playoff team, easily surpassing their win total from last season’s 2-20 debacle.

This time, with four-tenths of a second remaining in Thursday’s single-elimination first-round playoff game, the Liberty, trailing by a point, had a final chance to upset the Phoenix Mercury. As Sami Whitcomb inbounded the ball from the left side, players cut and sprinted in choreography. The first option — a lob pass toward the basket — wasn’t there, so Ionescu, coming off a screen, flared toward Whitcomb. Ionescu caught the pass from well beyond the 3-point line and launched a moonshot above the outstretched arms of Brittney Griner, the 6-foot-9 center.

The last-gasp shot fell a foot short. The momentum of the fadeaway jumper, and contact with Griner, sent Ionescu skidding backward with an 83-82 loss. “It just didn’t go our way,” Liberty Coach Walt Hopkins said.

With much to unpack after a thrilling game, the Liberty entered the off-season with plenty of promise, with the ball, and the franchise, in Ionescu’s hands. “I’m really excited for this next season, especially with this core group of players sitting next to me, to be able to grow from here,” Ionescu said, flanked by Betnijah Laney, the team’s leading scorer for the season, and Natasha Howard, its top rebounder, in the postgame news conference.

After a transcendent career at Oregon that made her the easy choice as the No. 1 overall draft pick for the Liberty in 2020, Ionescu severely sprained an ankle in her third W.N.B.A. game and missed the rest of her rookie season. This season, she was hard to miss. Her game face stretched across the entrance of Barclays Center. Slam magazine called her the “The Next Queen of NY” on its April/May cover. She traded wisecracks in commercials with the 11-time N.B.A. All-Star Chris Paul, who was in the stands for the playoff game.

Ionescu, 23, led the league in jersey sales this season, just ahead of Seattle’s Sue Bird, who has played in the W.N.B.A. almost as long as Ionescu has been alive. “She’s just done a really, truly magnificent job of balancing expectations that may have been unrealistic for a rookie,” Hopkins said.

In her playoff debut Ionescu finished with 14 points, a game-high 11 assists, and 5 rebounds.

It takes years, even for prodigies, to grow into their potential. Hopkins pointed to the Mercury’s Skylar Diggins-Smith, who at 31 made her first Olympic team this past summer, and scored a team-high 22 points against the Liberty. “She’s finally realizing her potential,” Hopkins said of Diggins-Smith.

“For Sabrina to get to where she’s at — where she’s taking over a young team down the stretch, to execute, and to find success, and to hit big shots, and to shout back when somebody’s talking smack to her and not take it from anybody — it’s been really, really special,” Hopkins said. “I’ve never gotten to go through and watch somebody evolve as quickly as Sab has, and it’s been a privilege, honestly.”

Even so, the team’s best player all season was Laney, who posted a game-high 25 points against the Mercury. Howard led the Liberty’s persistent defense with double and triple teams, limiting Griner’s ability to take over the game in the absence of Mercury guard Diana Taurasi, who did not play with an ankle injury. Ionescu, after starring as 2-guard in college, has learned to play the point, becoming more of a facilitator than a finisher.

In just her sixth career pro game, Ionescu became the youngest player in league history to record a triple-double, with 26 points, 12 assists and 10 rebounds in a win against Minnesota.

However, ankle tendinitis hobbled Ionescu in June, and that, combined with the loss of Howard to a knee injury, stalled the team’s progress. The Olympic break helped Ionescu return to form, but the team’s play continued to plummet, and the Liberty won only two games in the season’s second half. The Liberty went into their final regular-season game on an eight-game losing streak but held off the Washington Mystics to keep their slight playoff hopes alive.

With losses by the Mystics and Los Angeles Sparks on the final day of the regular season, the Liberty squeaked into the postseason. “Nobody thought we would be in this position,” Laney said after the Phoenix loss. “So the fact that we stuck together and made it here and fought hard, I’m really excited for what will come in the future.”

Hopkins blamed the officiating after the loss, though he didn’t have an issue with the calls in the game’s waning moments.

“There are a lot of things I want to say about the officiating in the W.N.B.A. and about the lack of respect this team’s gotten all season,” Hopkins said. “But I can’t say that, because referees are above reproach. They don’t have to go to a press conference after games. They don’t have to explain the mistakes they made, why they did what they do.

“I don’t know where the accountability’s going to come from, but it needs to happen. It was a bad season. The way they treated us was bad.”

Hopkins said the team was held to a different standard because it featured so many young players, including Ionescu and Michaela Onyenwere, who is the favorite for the Rookie of the Year Award. Against Phoenix, she played under nine minutes and didn’t score.

Laney is still building her résumé, fueled by disappointment and setbacks. Since the Chicago Sky drafted her in 2015, she was cut twice, by the Sky and the Fever, before she found a spot with Atlanta last year, when she won the league’s Most Improved Player Award. Then this season, she made her first All-Star team, with the Liberty, and led the team with 16.8 points per game.

Against Phoenix, Laney made her team’s last shot, with 2.7 seconds left, to tie the game at 82. But the Mercury got the ball to Brianna Turner underneath the basket on the ensuing inbounds play, and Whitcomb fouled her. Turner’s first free throw rimmed out, but she calmly made the second, to give the Mercury the lead.

After a timeout, the Liberty had the final chance to win. When Ionescu hit the floor after the missed shot, Howard ran over to help her up. Ionescu didn’t look angry or crestfallen when she walked off the court. Instead, she looked as if she was banking this experience for the future.

She talked about the film work she had ahead of her in the off-season, the experience gained, the lessons learned. “We are going to start training camp at this level,” she said. “This is the foundation.”