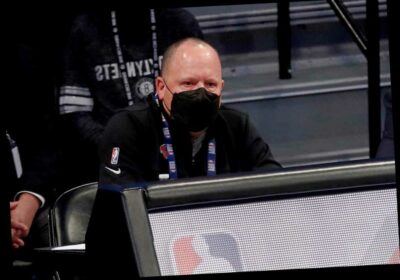 The Knicks and the Heat played a game that actually mattered Monday night in the Garden, and hey, it felt like this matchup hadn’t been worth a damn since Jeff Van Gundy walked out the door 20 years ago. So hours before tipoff, Van Gundy was busy reminiscing about the glory (and gory) days of Knicks-Heat, and pondering the most crucial head-to-head showdown scheduled between Miami and New York over the next three or four years:

Riley is an historic NBA figure who long ago built the Heat into a destination for marquee players serious about competing for championships.

“The only honest answer about Leon is, ‘We’ll see,’ ” Van Gundy said. “He’s never had the opportunity. He made a smart hire in Tom Thibodeau. [Immanuel] Quickley seems like one of the better draft choices. [Obi] Toppin is to-be-determined. The signings of [Nerlens] Noel and [Alec] Burks were terrific. The trade for Derrick Rose was terrific. I don’t know what more you can expect.

“But every step in the NBA is hard when you’re going from competitive to goodness to greatness to a championship. The next step is always harder.”

And nobody has any idea if Rose is capable of taking it.

We already know that Thibodeau can coach with Erik Spoelstra and the best of the rest in the Eastern Conference. Thibs is going to be there every night, locked in his stance, up in the other guy’s grill for 48 minutes. He might wear out his welcome in New York like he wore out his welcome in Chicago and Minnesota, but he’s going to wear out a lot of opponents before he does.

Can you win a championship with Tom Thibodeau as your coach? The evidence says yes, you can.

But by Thibodeau’s own admission, the man or woman who coaches the players is not as important as the man or woman who acquires them. In December, when asked about star power in the wake of Milwaukee’s $228 million supermax signing of Giannis Antetokounmpo, Thibs called it “critical” and said the Knicks needed “to be very aggressive in seeking out those opportunities. They just don’t happen by accident. You have to make them happen.”

If Thibodeau did not mean to publicly challenge his longtime friend, Rose, it sure sounded like he did.

Deep down, Thibs knows the Knicks will not win a title in the coming seasons if Julius Randle remains their best player. Randle deserves nothing but praise for making himself an All-Star, for taking his craft as seriously as he does. But look at the kind of stars who do win rings, and then look at Randle. It doesn’t add up.

That’s OK, as long as Thibodeau keeps building that culture and developing those players. As Brooklyn proved, the stars will come to you if you offer them a program and a path to a parade. And if you have a GM or team president who knows how to get a deal done.

On the subject of landing difference-makers, Pat Riley has been a Mariano Rivera-like closer in Miami. The payoff? Over the past 15 seasons, the Heat have appeared in six NBA Finals, winning half of them.

Over the past 20 seasons, the Knicks have made it to the conference semifinals a grand total of once, and lost.

Knicks executives have failed to persuade elite players to accept the challenge of ending the franchise’s biblical title drought. Everyone was going to want to play for Phil Jackson because, well, he’s Phil Jackson. Steve Mills was said to have more connections than he could count, and David Fizdale arrived with all of that Miami credibility and LeBron James’s imprimatur. James Dolan’s Knicks have been great at signing the recruiters, and not-so-great at signing the recruits.

Rose and his partner, William “World Wide Wes” Wesley, are the latest execs who are supposed to reverse the trend, with so many Kentucky products and CAA clients that the Knicks should be renamed the New York Wild-CAAts. Maybe Rose will follow the road traveled by Bob Myers of Golden State and Rob Pelinka of the Lakers, ex-agents turned NBA champs. Or maybe he’ll follow Van Wagenen back into celebrity representation.

One alarming sign, to date, is Rose’s refusal to speak to the professionals who cover his team on a daily basis. (The Knicks declined to make him available for this column.) Rose has gone eight months without talking to the team’s beat writers. If he thinks his prolonged silence makes him look strong and wise in some man-of-mystery way, it doesn’t. It just makes him look weak in a market that doesn’t appreciate weakness.

In the end, if Rose’s team wins big, the fans likely won’t care that he refuses to communicate with them. For starters, the Knicks carried a 24-22 record into Monday’s game with 22-24 Miami after the oddsmakers placed their Over/Under for total victories at 22.5.

“If anyone said, ‘Hey, the Knicks would have a better record than the Heat at this point,’ nobody would have believed that,” Van Gundy said. “It’s really remarkable how far they’ve come when the roster is still incredibly limited.”

Only that roster can’t stay incredibly limited forever. If the Knicks want to win a title sometime this century, they’ll eventually need better players. And right now, nobody has a clue if Leon Rose is capable of acquiring them.