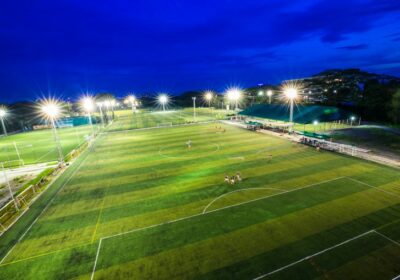 SINGAPORE – Team sports like futsal and basketball returned to selected ActiveSG and People’s Association (PA) venues on Wednesday (Nov 10) with the launch of a pilot scheme, but the pitches and halls of private sports facilities remained quiet.

But operators of these facilities and their patrons are optimistic that the programme, which allows up to 10 fully vaccinated persons to take part in team sports at the public facilities, will be extended to private venues soon.

Mr Sanjay Danani, 51, co-founder of futsal facility The Cage, said: “We’d like to think that the Government is trying to iron out all the kinks by doing it at their facilities first, before slowly inviting us to be part of the pilot programme.”

He has been in contact with Sport Singapore to ask if his team can do on-site recce trips to some ActiveSG and PA venues to learn about the necessary procedures such as the administration of antigen rapid tests, which users have to carry out themselves 30 minutes before their session.

He said: “Some of the concerns we’re getting is, is it possible to do it on-site? Wouldn’t that create a bottleneck or should it be done remotely just like how it’s done for office, so that you don’t have a large number of people gathering at one place?

“These are little things we’re trying to grapple with, and I guess we’ll learn along the way.”

Ms Geraldine Tan, co-owner of floorball facility Red Quarters, had hoped that private facilities would be part of the pilot scheme as the business has been badly hit by the tightening of Covid-19 measures in recent months.

While it had tried introducing training clinics and cutting booking fees by up to 50 per cent, the take-up rate has been low and business was a “small fraction” of what it was before.

But she sees the pilot as a positive step forward, adding that her team has been sprucing up its facility in the past few months and working on its standard operating procedure so it is able to welcome players back safely when they are allowed to do so.

Since the pandemic struck, Mr Teng, 25, has seen his playing time reduced from three to four times a week to once a week.

The club had continued with training sessions at the Padang until the recent two-person rules put a stop to that.

Now, he does light ball drills at a park, but said “there wasn’t the motivation of playing with your teammates and friends”.

He added: “I’m really quite excited about the small steps taken to eventually (hopefully) go back to 11 v 11; football was what kept me going during stressful periods.

“At least there’s a glimmer of hope, for sport to reopen and on a bigger scale. I honestly didn’t read much about the pilot programme, but I believe a slow reopening is good to see the initial risk exposure and to see how to improve.”

Swimming coach Yang Bin, who used to play tennis doubles three to four times a week at a condominium court and the National University of Singapore Society, was initially disappointed he would not be able to play at his regular venues.

With the current measures, the 51-year-old has been playing singles tennis once to twice weekly, and is considering booking one of the facilities that are part of the pilot scheme.

He said: “For younger players, singles matches are no problem. But for us at our age, it’s really intense because there’s no one to help you and everyone needs to run, so it’s quite tough.

“We can’t last as long as we could last time, so we have to rest more. I also don’t get to hang out with as many friends and usually with these sessions, it’s the more the merrier.”