LeBron James pushes fan who ran toward him at concert, Twitter reacts 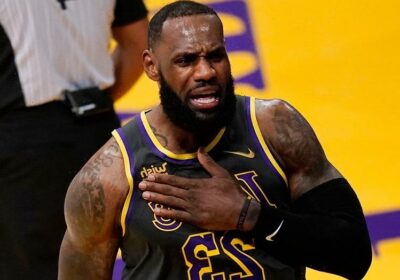 A video surfaced on social media of Los Angeles Lakers superstar LeBron James pushing away a fan who ran up to him during an Usher concert.

Social media users reacted to the video that was published by Ahn Fire Digital on Twitter via ClutchPoints. Some criticized James, while others came to the defense of the player, who appeared to be with his wife.

“I know you’re just protecting yourself but that’s just a kid bro. SMH!!!” another user wrote.

Others had a different take.

“I don’t even like lebron at all but I gotta be honest. He had every right to do this. He is at an R&B song with his wife. He probably would’ve took the picture if he was by himself,” one user said.

“Watch people hate on lebron for this even tho he invading on lebrons space,” someone else wrote.

James and the Lakers were eliminated by the Phoenix Suns in the first round of the NBA playoffs. Just a few days ago, Los Angeles pulled off a blockbuster trade with the Washington Wizards to acquire point guard Russell Westbrook.

Now, with James, Westbrook, and Anthony Davis, the Lakers feel like they have a “Big 3” of their own to reach the NBA Finals next season.