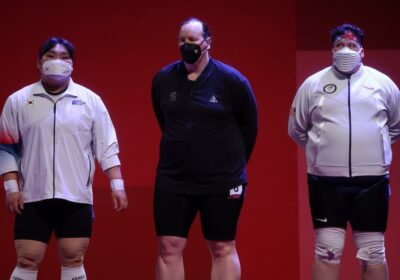 Laurel Hubbard, centre, is introduced to the auditorium

Laurel Hubbard made history as she became the first openly transgender woman to compete in an Olympic Games.

The 43-year-old New Zealander began her bid for a medal in the women’s +87kg weightlifting final in Tokyo on Monday, among a 10-athlete field which included Britain’s Emily Campbell. She failed with her opening attempt at 118kg, dropping the bar back behind her.

Assigned male gender at birth, Hubbard set national records in junior competition under her given name before undergoing hormone therapy and coming out as transgender in 2013, aged 35.

She won a silver medal at the 2017 World Championships before breaking her arm at the Commonwealth Games in Australia in 2018, but returned to win gold at the 2019 Pacific Games and qualified for her debut Olympics.

The International Olympic Committee leaves rules around athlete admission down to individual sports, and Hubbard has met the International Weightlifting Federation’s 2015 guidelines stating transgender athletes must take medication to lower testosterone below 10 nanomoles per litre for 12 months before competition.

Her participation will further stoke the debate around transgender athletes’ participation in sport. Some have questioned the fairness of allowing women who were assigned male gender at birth to compete against non-transgender athletes, pointing to the athletic performance gained through male puberty, which they say cannot be offset by testosterone-inhibiting medication.

But defenders of transgender athletes in women’s sport say there is not enough scientific evidence on the topic to draw firm conclusions, and have pointed out in the case of Hubbard that although she is highly competitive, she is not routinely dominating the global stage.

Hubbard has received the backing of the New Zealand Olympic Committee as well as the country’s prime minister, Jacinda Arden, who emphasised that she had followed all the rules to qualify and compete at the Olympics and deserved her place.

“I am grateful and humbled by the kindness and support that has been given to me by so many New Zealanders,” said Hubbard after being named in her country’s team for the Olympics.

“When I broke my arm at the Commonwealth Games three years ago, I was advised that my sporting career had likely reached its end. But your support, your encouragement, and your aroha [affection] carried me through the darkness.”