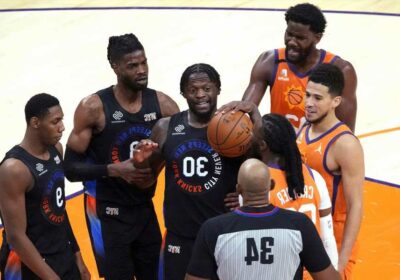 Knicks plan to ‘throw the first punch’ in Suns rematch

PHOENIX — This was the first time all pandemic season the Knicks played in front of a real, live, half-packed, hostile crowd.

They didn’t handle it well. They blew a seven-point lead late in the third quarter, and Taj Gibson later lost his composure as the powerhouse Suns routed the Knicks, 128-105. before a boisterous crowd of 8,063 — the NBA season’s largest crowd — at Talking Stick Arena.

All the frustration of the Knicks’ collapse boiled over midway through the fourth quarter when Gibson went after Chris Paul while the Suns guard was bringing the ball up-court. Gibson body-checked Paul to the floor like it was hockey with seven minutes left.

Gibson was called for a flagrant foul, and Paul jawed with Knicks coach Tom Thibodeau over the infraction.

The downtown Phoenix arena — which is allowed to admit fans at 50-percent capacity — exploded with as much noise as this NBA season has probably heard.

Tempers were still hot in the Valley of the Sun later in the fourth, when Julius Randle and Jae Crowder had words after Randle knocked Crowder down battling for a loose ball. Randle picked up a technical foul.

RJ Barrett said before the contest, “We definitely owe them,’’ referring to the Knicks’ late loss to the Suns at the Garden on April 26.

But Barrett, despite scoring 23 points, figured into the collapse. He was part of the mess when the Suns closed the third quarter with nine unanswered points, including four points in the final 1.8 seconds of the quarter.

Off a Derrick Rose 3-pointer, the Knicks led by seven points with one minute left in the third before the collapse.

After a basket by Frank Kaminsky and a 3-pointer by Cameron Payne pulled the Suns within two, Randle shot an airball. Phoenix’s Devin Booker raced downcourt and blew the layup, but Torrey Craig tipped it in to tie the score.

Then came the biggest blunder of the game. Barrett lackadaisically looked to inbound and had the ball stolen by Payne, who laid it in to put the Suns up 90-88 after three. It sent the crowd into a frenzy.

Crowder got hot in the fourth quarter and finished with 18 points. His second trey of the quarter, with 8:20 left, gave the Suns a 104-93 lead. That made it a 23-5 run from the time the Knicks were up by seven late in the third.

After two losses, the Knicks are 2-2 on their road trip, which will end in Los Angeles with games against the Clippers and Lakers.

The Knicks got off to a slow start, trailing 21-8, with Suns center Deandre Ayton dominating inside. But the Knicks roared back on a 16-2 run late in the first quarter. They went up by as many as 11 points and took a 63-56 lead at halftime behind terrific ball movement, strong shotmaking by Randle and another spirited, bouncy performance by Derrick Rose.

They also held Booker, who normally torches them, to just eight points in the first half, as he went 1-for-6 from the field. Booker finished with just 16.

Randle pounded in 16 points in the first half and wound up with 24 points and 11 rebounds.

Rose was 6-for-8 from the field for 14 points and five assists in 18 minutes of the first half, but was quiet after that. He finished with 17 points.

“You got to keep these guys off the glass — Randle is a handful and Rose is one of those guys you don’t realize how good he is and what effect he has on winning before it’s too late,’’ Suns coach Monty Williams said before the game. “We want to make sure he’s a focus.’’

The Knicks functioned well with guard Frank Ntilikina back in the rotation to make up for the loss of Alec Burks (contused knee) and Immanuel Quickley (sprained ankle).